The group handed out pamphlets to students who walked past them and informed them about abortion and stated that some people do not believe that a fetus is a human being.

“We are here because there are people in this country who are saying certain human beings aren’t people and we think that is very wrong,” said James Silverman, 23, a supporter of Created Equal . “They say that because they are different from us in size, in age and how developed they think because of those differences they are not technically people.”

During the protest, Pro-choice individuals were on the plaza to provide comfort for women who saw the displays and possibly felt uncomfortable.

Candice Norcross, 32, of Grand Rapids said she came to GRCC today to provide a safe space for women and saw that some of her friends were upset by the displays put up while Created Equal was at GRCC.

“I am not interested in approaching any of these people and engaging in dialect with these people because no one is going to change their mind – those of us that are here with signs.” said Norcross, adding she just wanted to provide “a safe space for women.”

There were no signs of anyone being harassed today, however someone did knock over one of Created Equal signs. It was unknown whether it was a student or a protester, but the demonstrators did not want to press charges.

The demonstrators were on campus until 5 p.m. and will be heading to Western University Michigan to continue their college tour tomorrow. 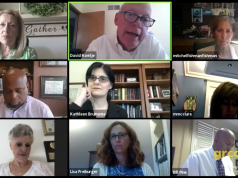 The challenges I find with the Black Lives Matter foundation