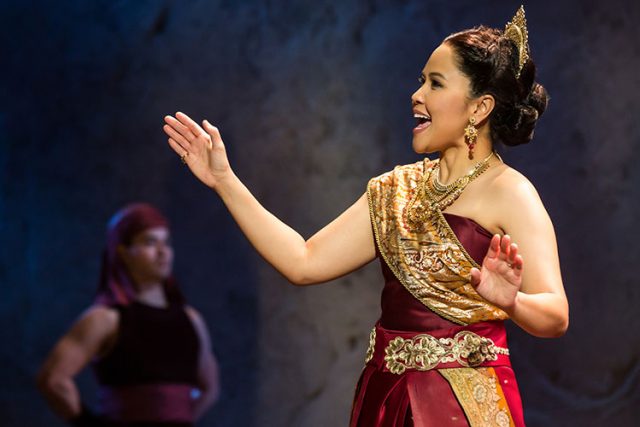 On June 5, Broadway Grand Rapids brings Roger and Hammerstein’s “The King & I” to the DeVos Performance Hall. The musical is now touring across the nation and The Collegiate had a phone conversation with the show’s actress, Joan Almedilla, who is known for portraying roles on Broadway such as Fantine in “Les Misérables” and will be playing the role of Lady Thiang in “The King & I.”

How are you doing?

Good! I’m in Palm Springs. It’s like 100 and something right now.

Get ready for a drastic change in a few days.

In Michigan you’ll need to either wear five layers of jackets or shorts.

How’s the tour going? Do you have any spots so far?

I think it kind of depends. My son loves uh – my son is also in the show by the way, he is one of the royal twins – you know whatever he likes. He loves the museums, so I think he enjoyed Boston a lot çause of the things we could do together.

But then there are some places you are kind of surprised by. I think we were in – was it Appleton? With the huge Zoo?

I think. My zoo knowledge is pretty bare.

I mean, I like them all. We were expecting Worcester, New York would be something, but it was actually kind of fun. So you never know till you get in the city.

What’s it like working with your son in a show? Is this his first big production?

It’s been fun. He has friends on tour.

What kind of led you into acting?

I wanted to be a singer – acting was really something I really wanted to do.

When I moved into the state in 1993 I told my mom I wanted to audition, what do I have to lose? So I did that. And you go through your process, and finally I got the job. I got hired to do a lead on Broadway. And I was like – you know “Act and sing at the same time? What?” It was so new to me.

But then, I met great-great friends. And I’m still friends with them in that show – “Miss Saigon.” And they recommended me to an acting coach in New York. And boy was he brutally honest. He’ll tell you not what you want to hear.

I mean, my favorite thing I say about him is…he broke me to pieces and then put me together again. You know, like, if you take acting classes in New York you better be ready, and that was my preparation for that. And I eventually loved it. The more I focused on acting, I didn’t worry too much about my voice or my singing because it’s always been there, and my acting coach told me, “You were born and you have that voice already.The only thing you gotta do is take lessons and take care of it.” Just learn how to communicate and act.

We have a big theater community here in Grand Rapids. What advice would you give to any of them?

The first thing you gotta do is find a mentor. That’s really important. A mentor that will tell you, “Look this is what’s happening.”

The earlier you find a mentor the better. I always believe in the higher power, in something you cannot control but you know it’s there that will rescue your mind, body, soul, and spirit. That you know if you hang onto and say, “I’m gonna be fine, I’m gonna be okay. I didn’t get this job in a week, but I’m gonna be okay and I’m gonna move on.”

And really, really target great work ethic. That’s gonna get you so far. You can be the most talented person, but if you don’t have the best work ethic then what’s the point? The purpose is to be on this planet, and to do good things, and spread good things on this earth.

I wish I had that mentorship, or that environment and community in high school – in college. But you know I learned as I got older, and I got a mentor. It’s never too late for anything.

Find a mentor. Second is pray or meditate, or whatever you believe in. Something that is beyond your understanding. And then have a great work ethic. A great work ethic means you’ll work hard, you’ll respect your fellow actors, you will respect yourself by not comparing yourself to other people.
“The King & I” comes to DeVos Performing Hall June 5 – 10. For more information on tickets visit BroadwayGrandRapids.com