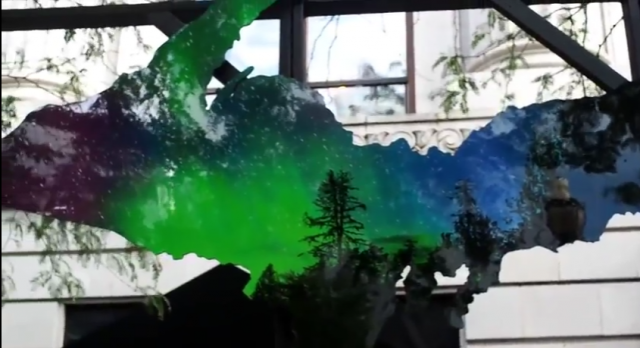 Adversity and hardship, that’s what 26-year-old artist Tom Gifford was faced with at a young age. When he was just 13 years old, Gifford experienced an ATV accident that broke his back and put him in a back brace for six months.

While an injury like this would set most people back, this only opened new doors for Gifford, a 2018 ArtPrize finalist in the 2-D category.

After his accident, Gifford was homeschooled through 12th grade and said he had a lot of freetime after school. And in this freetime he couldn’t go a week without going to take pictures of things like nature. This love of photography would later shape his future as an ArtPrize artist.

Prior to this year’s ArtPrize event, Gifford knew that he wanted to enter something, but he didn’t know what. He realized that he enjoyed everything about Michigan as he is a native of Michigan and currently lives in Muskegon. As Gifford was piecing together ideas, he discovered his inspiration, his photography. He said that he started looking at his own photos and found a Northern Lights photo which he captured in the Upper Peninsula of Michigan. This will later be used as the photo representing the Upper Peninsula in his piece.

His inspiration not only came from his own work, he also sought insight from fellow artist, Peter Lik who is a photographer in Las Vegas.

While the inspirations seemed to flow together nicely, crafting the piece was not so easy as Gifford ran into a few obstacles. Time, of course, is always a restraint. Gifford estimated that it took roughly a “year and a half of trial and error” and about four months to complete that specific piece after all the ideas came together.

Making the piece also came with some major problems. Gifford knew that he wanted his ArtPrize entry to be massive, but he did not know how he was going to accomplish this. Gifford decided that he wanted to cut out large pieces of acrylic glass and print his pictures that he took onto metallic photo print paper. Of course, he did not want to jump right into the final product, so he made dozens of mini versions of the piece in order to get the hang of it.

Money is also a major factor in creating something so big. Gifford said that the Lower Peninsula alone costed around $700.

After Gifford faced and overcame all his obstacles, he entered his piece into ArtPrize. ArtPrize is a competition and with every competition comes a winner. If Gifford won he said that he wanted to open (his) own store and studio to do new projects and sell what (he) make(s).

Overall, Gillard feels that art is “your own beauty reflecting onto something else” and in his case his beauty is his photography and his something else is the representation of Michigan in his ArtPrize entry.