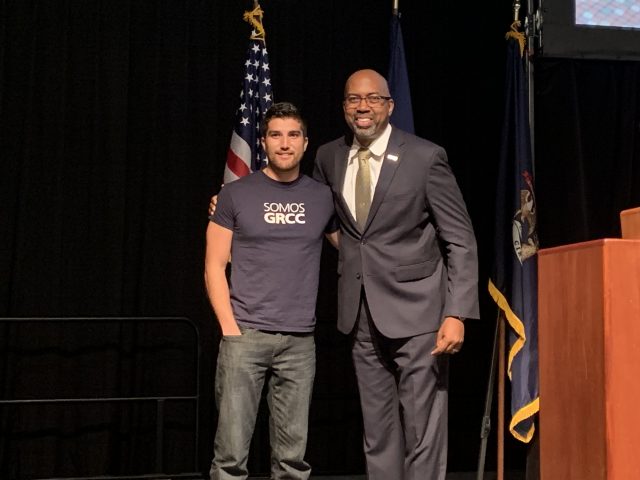 Between welcoming the faculty back to campus and announcing faculty and staff awards at the Aug. 20 opening day event, Grand Rapids Community College President Bill Pink unveiled big plans to possibly consolidate and create a new centralized campus on the lakeshore.

During his opening day speech, Pink announced a tentative plan to consolidate GRCC’s four Holland Campus locations in the 50,000-square-foot former JCPenney storefront which closed in 2017. This space is just a portion of what was formerly known as Westshore Mall in Holland. Pink told faculty and staff that a deal had yet to be reached on the property and that the GRCC Board of Trustees is expected to take up the issue in September.

Before Pink broke the major lakeshore campus news, incoming Provost Knetl kicked off the opening day event by expressing his excitement for starting his new gig in September. Then Knetl introduced a humorous video starring Pink and his daughter rushing to campus in an Uber driven by Grand Rapids Mayor Roselynn Bliss. The video showed off new technology including an electronic car with a wireless charging station and a drone that delivered his eye glasses to the fieldhouse. Later in his presentation, Pink would make reference to similar technology advances that have changed our lives while simultaneously disrupting businesses.

Using the newspaper industry as an example, Pink spoke about how disruption can force whole industries to rethink how they do things to better fit the challenges of a changing landscape. Pink talked about how the Dallas Morning News had to go digital and start printing less paper copies to keep up with the changing times. Likewise, Pink said GRCC has to be ready to change and adapt.

Pink said he’s been thinking about this in response to Gov. Gretchen Whitmer’s proposed Reconnect Grant. The grant would give students ages 25 and over tuition assistance in their associate degree programs or skill training.

Pink said GRCC needs to be aware of the changing environment of the college landscape and the potential disruptors GRCC has. Potential disruptors include“businesses and companies who are doing their own ‘universities,’ have their own training and education programs that will give a bachelor’s level degree as they say… for-profit organizations, for-profit institutions, for-profit colleges and universities,” Pink said.

“Disruptors are out there,” he said. “My question is, instead of being the ones being disrupted, what if the community college was the one being the disruptor? What if we flipped that whole story around, what if we decided that just because we’re a community college, just because people have those expectations of what this institution does in West Michigan – and those are pretty high expectations by the way – what if we decided what are the ways that we can be the disruptors? What are the ways, in West Michigan, we become the ones people look to and say, ‘They did what?’ because the disruption that we cause.”

He mentioned different ways GRCC is already trending in that direction as it considers ways to give students easier access to class offerings including: offering more accelerated seven-week courses, continued online growth and weekend college.

“It doesn’t mean that everybody is a weekend college student, but it might mean 200 or 300 college students say ‘I can access college now,’” Pink said. “Because those 200 or 300 students matter because it matters to them,” Pink said. “… Most of the people I’m telling you about right now, from a weekend college perspective, I haven’t researched and I haven’t taken data from them. You know why? They’re not here, I’ll never know unless I try and try again to try and see and throw it out there to see if it works, not being afraid to fail.”

Pink then introduced Kevin Vazquez, a GRCC graduate who is now a graduate student at Western Michigan University. He shared his story about how GRCC allowed him to accomplish his goals.

“At one point I dropped 13 classes, I was on academic probation three times, I had a GPA of 1.8,” Vazquez said. “Would you believe me that I was a graduate student? If you don’t, that’s okay because I hardly believe it myself sometimes and this kind of goes back into my story. I am a Latino immigrant DACA (Deferred Actions for Childhood Arrivals) student and with those circumstances as a first generation student, on top of everything else I had to overcome, economic, academic, and social challenges. But there was no better (way) to overcome those challenges than here at GRCC. When I stepped on campus, it didn’t feel like I didn’t need to tackle all these challenges alone. It really felt like we can handle this together and overcome these challenges.”

His speech highlighted the impact GRCC can have and underscored Pink’s point about how faculty and staff make a difference to these students.

Pink then showed a video of a student, Amber Rose, who is now pursuing a Ph.D. at UCLA, but started her journey here at GRCC.

Pink went on to play a video clip from ”The Pursuit of Happiness,” the movie about Chris Gardner.

Before concluding, Pink awarded Sarah Rose, director of GRCC’s Occupational Support and Disability Support Services programs, Debbie Dewent, an assistant director of Instructional Support, and Barbara Bouthillier, an instructor in the Mathematics Department with Excellence in Education awards for all the hard work they do on campus. Rose won the faculty award, Dewent won the staff award, and Bouthillier won the adjunct award.

After the speech President Pink had some time for a quick interview.

Pink explained what he wanted GRCC students to know as we start a new academic year, “The future of this institution is very promising and when the institution’s future is promising that means the student’s opportunities are going to be promising… this is going to be an awesome semester.”

Pink also shared his goal is for this new year.

“We really want to make sure that we not only look at what we’re doing now, making sure we’re providing the best quality of accessing our education. That’s what I’m more focused on how people access us. Our education is second to none. Our institution is awesome. I want to make sure people can access us in a way that’s going to be doable. That’s my number one focus, making sure they can access us because access helps lead to success and we need to make sure that access is wide open as possible so we’re meeting students where they are, not asking students where we are.”

Bookstore charges and Raider Card Transfers run through September 6 and the last day for the FACTS payment plan is August 30. You can call or email the financial aid office at financialaid@grcc.edu and (616) 234-4030 if you have any questions about your financial aid, or visit your advisor if you have any general questions.