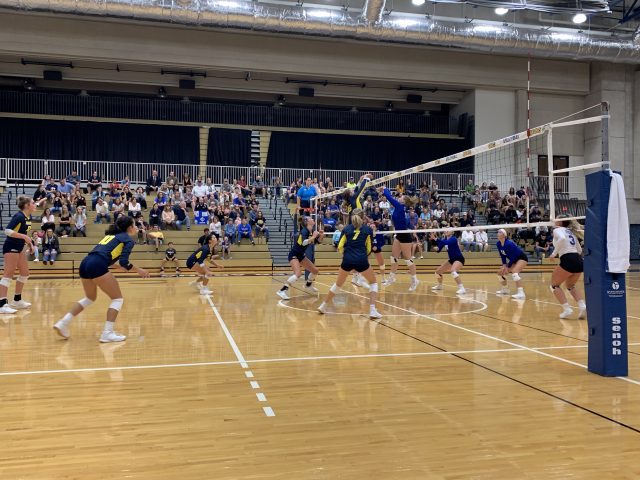 The Raiders showed their resiliency by holding on and finally winning at the end. Even in the sets they lost, they kept it close and kept it competitive the whole time, something Raider fans expect from a team with national championship hopes.

The game was back and forth the entire night. When asked about this, sophomore outside-hitter Jasmine Wellet said the game had peaks and drops,  “but we found our happy medium. When we stayed calm, but still intense during tough situations that kept us alive.”

Wellet said the team focused on fighting for each individual point and that waskey to their victory.

“We had to focus on one point at a time and realize how important every single one is,” she said. “When we miss serves, defensive assignments, and have high hitting error, I think we can (dwell) too much on past mistakes. We did get better at realizing that the point was over and we had to fight for the next one.”

Freshman outside-hitter Annie Holesinger lead the team with 16 kills and Dani Johnston was second with 12. With those kills tonight, both of them hit the 100 kill mark.