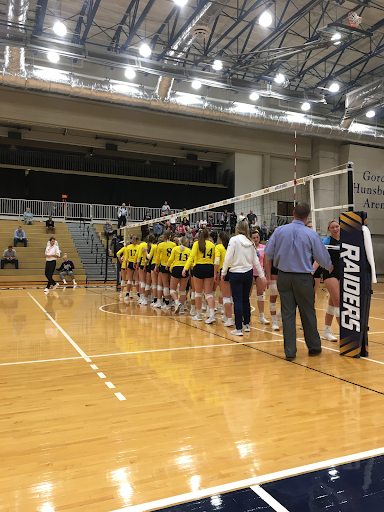 Tuesday, October 7 ended with a hard-fought victory for the Grand Rapids Community College women’s volleyball team, as they defeated Kalamazoo Valley Community College three sets to one. The sets finished 28-26, 25-20, 27-25, 25-23.

The first set started with each team getting a feel for their opponent as each team continued to go back and forth in points. The tooth and nail finish ended in a victory for the Raiders, as they were able to pull off the 28-26 victory after the 19-minute set. The second set consisted of another back and forth affair, this time a 25-20 win for the Raiders.

As the third set began the Raiders seemed to fall apart during the three-minute intermission, allowing the Cougars to gain a 16-6 lead. Head coach Chip Will called for a timeout to get his players back in the game, and that is exactly what he did. Coming out of the timeout, the Raiders surged into an outstanding 16-5 run and forced Kalamazoo to call a timeout themselves. As the Raiders continued into a commanding 25-24 lead, it seemed the match was in the bag for them. After a few plays being controversially officiated, the Cougars were able to will themselves back and win the set 27-25.

The fourth and final set was finished with the Raiders finally able to finish out the match 25-23.

Freshman Jamie Rozell, a setter and right-side spiker for the Raiders, was one of the four players to finish with five kills or more. She commented on the team’s focus coming into the game and how they were able to keep their composure and energy levels high throughout the almost two-hour-long match.

“Trying to cheer on your teammates is a main component of keeping the energy up,” said Rozell. “… Our main focus was to stay composed out there and try not to make as many errors as you normally would.”

The Raiders now have an overall record of 21-6 and will be playing their next home game against Kellogg Community College on Tuesday, October 15 at 6:30 p.m.