On Wed. Oct. 2, a witness came into the Grand Rapids Community College Police Department with a crying woman to report a domestic assault that had occurred on campus near the southeast parking entrance at the Bostick Commons area.

According to the witness, the woman had gotten into a verbal argument with a man that turned physical when she tried to leave the scene. The witness said the man was physically attempting to block her path and tore her hair piece off and threw it to the ground, before leaving once he saw the witness.

The crying woman was a GRCC student and referred to the man as her boyfriend. She said that they had a son together that currently lived with his father. She also said that he had stolen her car’s license plate, but that she did not want to talk further or press any charges.

The police identified and called the boyfriend, who is not a GRCC student, and asked him about the incident. He downplayed the situation saying that they fight like that and that it was normal, and was reportedly angry and yelling, “f*ck the witness.”

The couple was identified as the same couple that had been involved in another incident on campus that had been reported on July 3. According to the prior incident’s report, the couple had gotten into an argument over the phone regarding the care of their son and that had escalated into the man driving to the GRCC campus with their son in order to confront the woman who had told him she would be there signing up for classes. He arrived on campus before her and called her to ask where she was, she lied and said she was already on campus which she said angered him.

When she did arrive at the enrollment center she asked him to leave but he refused, at which point she tried to escape him by going into the women’s restroom but he followed her into the facility. She claimed that he was “fixing to hit me,” but that the presence of two other women in the restroom made him leave and feign ignorance. He said that he thought it was a family restroom and left as soon as he realized his mistake.

She claimed that once she came out of the restroom she asked him to leave as her ride was coming but that he didn’t listen and instead tried to get her to buy him some snacks. When she refused, he then grabbed her phone, took it out of its case, and smashed it on the ground, and then picked it up and took it outside to put it back together.

He admitted to breaking the phone, but claimed that it was an accident and that it fell out of his hand, and that she had been crying for help for no reason. Their young son was with him during the events that transpired.

A GRCC faculty member who witnessed the incident according to the police report, heard a scream and saw the man purposely smash the phone onto the ground. The witness also saw the man then pick up the phone, leave, and return shortly after.

Following the initially reporting of the incident on July 3 and subsequent interviews a GRPD officer discovered the man following the woman, who had the couple’s child with her. The officer told him to leave and drove the woman and the child to her sister’s home.

The woman was originally going to press charges for destruction of property but later dropped the charges during a call with the police department saying that she was over the incident and that he had given her his phone as a replacement. No further action was taken at that time as a result.

However, following the second incident on Oct. 2, a warrant was issued for the man’s arrest. He had two other active Michigan warrants at that time, one for the city of Kentwood for failure to appear in court, and the other for the city of Grand Rapids for aggravated assault. Following a court hearing, a Personal Protection Order was issued against the man that keeps him from legally being within 100 yards of the woman. 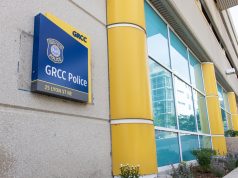