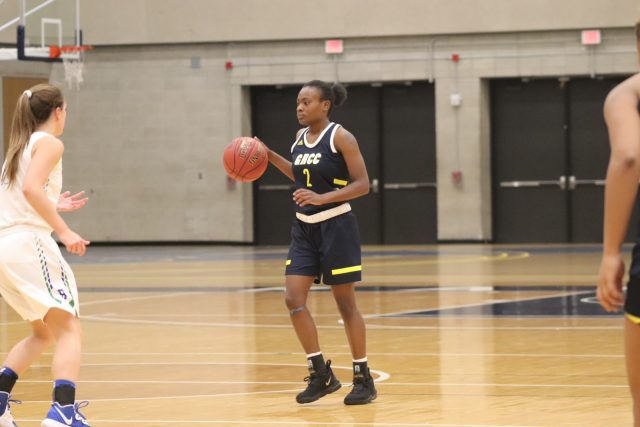 The Grand Rapids Community College Women’s Basketball team lost to Bay College 65-54 last Friday night in their first game of the season. It was a hectic game filled with a lot of fouls and a multitude of turnovers.

It was a tough loss for the Raiders as they hoped to start the season off with a win.

“We’ll grow,” said GRCC Coach Dave Glazier after the game. “Those are tough spots early in the season but that’s why we play teams like this, but we’ll adjust. I thought we did a pretty good job of that halftime. We had 18 turnovers in the first half, not that I like nine in the second, but we cut in half in one half. I like the way they responded to the challenge at half-time.”

In the first part of the game the Raiders were winning on the inside, fighting for rebounds and getting good buckets in the paint. As the game went on though, Bay College’s full court pressure defense caused too many problems for the Raiders as they had 27 turnovers in the game.

Even though it was a hard loss, sophomore guard Rayven Mondy had a good game leading the team with 14 points and collected four rebounds and only one turnover to round her stat sheet.

There were times when it looked like she might lead a comeback taking the ball coast to coast for a layup, showing off some impressive ball skills, but Bay College kept hitting threes and causing turnovers.

She spoke on the team’s play overall stating, “I think we need to improve our communication, but we have a very strong chemistry…”

“I’m not going to lie, it was a pretty good game,” Smith said. ”We played hard, we came off slow in the first half but we came back. I love my team to death, we put our all into that game, but I feel like we could work more on our communication skills.”

Guard Eurasia Green-Boyd was second on the team with 11 points and led the team with four assists. They were out rebounded 46-36 by Bay College and shot 12 of 22 from the free throw line.

Looking forward to their next game, the Raiders will  face Aquinas College at 5:30 p.m. Nov. 5 at Aquinas.