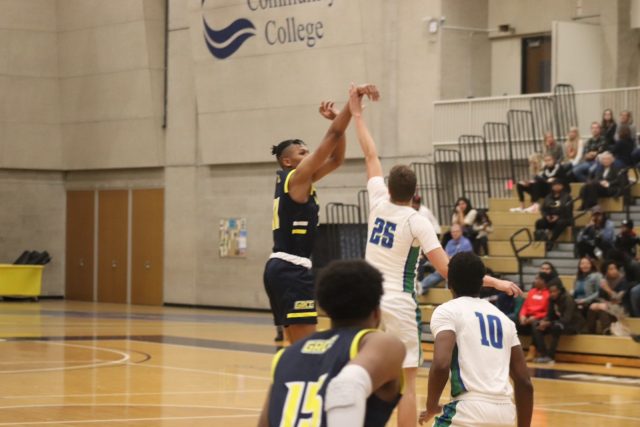 The Grand Rapids Community College Raiders took the hardwood for the first game of the 2019 season with a new coach at the helm and came out with a victory against the Bay College Norsemen.

The Raiders came out with a lot of energy and aggressive play in the first half starting the game up 22-7 before the Norse head coach called their first timeout. The lead was pushed to as much as 20, as the Raiders were aggressive on defense led by Ryel Daye who brought energy to the floor and was helping the Raiders convert the steals for easy transition points.

The Norse were not backing down as they fought back at the end of the half to cut the lead to only 41-31. The Norse then came with energy of their own coming out of the half with two quick threes and taking their first lead of the game with 14 minutes to go in the half. From there, it was a dog fight as the game became more physical, and the teams were trading points back and forth. The Norse were leading late in the game, but Johnny Davis coming off the GRCC bench brought energy back to the team as the 6-8 sophomore had an electric dunk to bring the lead down to only four.

It didn’t take long for the sophomore to continue his off the bench impact as he would also have an and-1 and convert the free throw to help the Raiders crawl back to within one point of the Norse. David Hearns a sophomore guard would be the deciding factor for the Raiders as he hit two free throws to finally bring the Raiders into the lead with 16 seconds to go in regulation, then Daye would come up again on the defensive side of the ball and cause another quick turnover, which caused the Norse to have to foul Hearns again, who would deliver the dagger with 3 seconds, finishing the game 70-68 for Coach Bauer’s first career win with the Raiders.

Leading the team with a double-double was freshman Herman Brown in his debut, scoring 15 points and collecting 10 rebounds. Coming off the bench, Johnny Davis had 14 points and 9 rebounds to round out the Raiders play.

Winning a close season opener is great, but Brown knows the team still has work left to do in practice.

“We need to work on communication, we stick together really well, but we need to keep fighting. That’s it,” Brown said. “We all will develop as a team, which will be great.”

“We have to work on communication and rebounding,” he said. “They outrebounded us which is something that we wanted to focus on coming in, but definitely want to work on the communication.”

Daye said he thinks this close game will benefit the team greatly as well.

“In college basketball there is a lot of close games coming up, so having a close game in the first game, is going to help us build good teamwork towards the end and show us what we really need to do coming down the line in February when the games matter,” Daye said.

Coach Bauer is happy with his first win but is not satisfied.

“It feels really good,” he said. “I’m just happy for our guys. They’ve worked hard and we’ve had some adversity. In scrimmages we have played some tough opponents which is always good, but we are still way early in the growth process here. Guys are trying to figure me out, and I’m still trying to figure them out, and how to best work with each other. To get rewarded in our first game, against a good, well-coached team is great.”

Bauer said he’s glad the team was able to persevere after falling behind after being up so much and continuing to fight for the win.

The coach had big plans for the Raiders’ next practice.

“We do nothing well,” he said. “We don’t know how to play off the ball, we aren’t trusting each other doing stuff away from the ball yet so that’s going to be a huge, long process and it’s going to take a long amount of time (in practice). We are going to work on everything, and we have a long way to go, but it was good to get a win tonight.”

You can catch the Raiders on the hardwood next Thursday (Nov. 5) against Cornerstone University JV at the Gerald R. Ford Fieldhouse where they will look to get their second win of the season.