My girlfriend and I went to Gaines Township Meijer on March 19 to get a few items, and the store seemed quiet. There was a respectable amount of people there still purchasing essentials, but not as many as you’d expect for a Thursday afternoon during a virus pandemic. March 19 there was also the announcement made by 24/7 businesses including Meijer and Walmart that stores would now be open for a reduced amount of hours each day so staff can restock and clean. I went back to Meijer March 20 and there were more people than you wanted around you during a social distancing phase in society. Even with markers at the self-checkout lines for each individual to stand six feet apart, people were still standing close to one another. Shelves were already thinning with products by 12:15 p.m. It was craziness. I found myself trying to steer clear of other patrons myself, and didn’t grab a cart because they were out of Lysol wipes But I only saw a small handful of people wearing masks and gloves. It’s crazy how fast things are changing.

I’ve been choosing to stay home as much as possible, but Animal Crossing New Horizon launched March 20. When the console launched that was related to the game, there was a line outside Target and it was sold out within five minutes. However, that was a couple of weeks ago. On Friday, I went early to get the game, about 30 minutes before opening, anticipating a line. My friend and I were the only people there. This was a highly anticipated launch so it was shocking to me that no one else was there. A couple of people ended up coming before opening, majority looking for toilet paper, which was sold out.

The empty aisle of D&W in Caledonia.

Open stores in Caledonia include Hallmark, Verizon, and the local pharmacy (curbside pickup and delivery only) 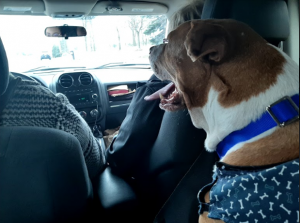 When a simple grocery outing becomes an exciting family event.

Business was mostly as usual at the bank. There were maybe a dozen people there and everybody was in a rush to get in and out. It was quiet. But, the whole bank reeked of disinfectant.

With the coronavirus going around and how panicked our shopping has been as a state, I expected more panicked type actions at the bank as well. I was wrong though, because people were calm. If anything, they were suspicious, like if there had been a murder mystery and everyone was looking around to see who was carrying a deadly (biological this time) weapon. Because of this, I think, they stood an extra four feet apart from each other in line.

There were also two red solo cups with pens in them at each of the counters. There was one labeled dirty and one labeled clean.

To no one, these streets belong: Thursday, March 19
My mother and I drove up to St. Ann’s Home on Leonard Street in Grand Rapids to drop off clean clothes for my grandmother. The drive up there was pretty peculiar, as everything seemed to be at quarter capacity often not even that. Few cars on the road, empty parking lots, bare streets. It was like the rapture happened and those of us out and about were the only ones left. All alone in the concrete jungle. Sure there were some pedestrians like I remember seeing three or four in all. One man walking through a parking lot had a pair of gloves on, a surgical mask over his oxygen tube, had his oxygen tank in one hand and a box in the other. And parking lots were abandoned. The parking lot of the Chili’s on 54th Street, which is normally bustling with life and cars was bare and empty as if no one had ever been there at all. And it wasn’t even just Chili’s either. Many stores and restaurants looked as if all the cars and customers just flew away like a flock of doves on a warm summer day. It would appear that the coronavirus took not just our health and toilet paper but the life of our very streets as well.

Overheard by a co-worker in a downtown office building
12 p.m. March 18
Reported by Co-Editor-in-Chief Brianna Wetherbee

“The ramp is so full usually. Yesterday when I parked in the garage, there were only four cars there. Today, my car was the only one there. There is someone who I would always say hi to. I haven’t seen her in a week. She must be working from home, along with the rest of the world. You know, (my co-worker) got the last somewhat decent laptop at Best Buy. Apparently they’ve been inundated with people buying laptops to work from home with. You would think people already had their own. Apparently not.”

On Wednesday, I had a surreal experience returning to Grand Rapids Community College. Taking photos of the vacant classrooms and hallways in Raleigh J. Finkelstein Hall, seeing the school so empty almost felt apocalyptic. Aside from the GRCC campus, the downtown area felt almost like a ghost town. The desolate feel of the usually busy West Michigan city was off putting. Knowing that classes are continuing online, but not knowing how many of my peers are being impacted directly from the coronavirus, is truly unsettling- especially seeing it firsthand by walking through the empty campus.

I went to the Rivertown Meijer Monday afternoon to get a couple things. I was planning on getting some hotdogs and buns with a Mountain Dew for a couple meals this week with some cookies for dessert. Mountain dew, cookies, and hotdogs were in stock. When I went to select the buns, I was in disbelief that not any hot dog buns, hamburger buns, or bread was on the shelves. At this particular Meijer they get trucks Saturday nights to have full shelves for the week’s deal and plenty of selection for customers. Working in the deli for nearly two years and shopping at that Meijer since it opened nearly twenty years ago, I never thought I wouldn’t see a loaf of bread of buns there on a Monday. If it was a Wednesday or Saturday, I would still be shocked but not in disbelief. I didn’t want to take a picture to remind me in the future when there weren’t any buns to buy due to consumer fear. If anything, it made me think I wouldn’t complain but be thankful in the future when shopping at Meijer and they were out or didn’t have enough of the buns I needed and I would be forced to buy a different brand.

Editor’s Note: Updated March 22 to include observations from additional reporters.