Joe Biden, the presumptive democratic nominee for the presidential election this fall selected Kamala Harris, California senator and former primary election rival, to join his ticket against the incumbent Donald Trump this fall.

“I have the great honor to announce that I’ve picked Kamala Harris- a fearless fighter for the little guy, and one of the country’s finest public servants- as my running mate,” Biden tweeted on Tuesday.

Daughter of Jamaican and Indian immigrants, Harris has a strong track record of experience including serving as San Francisco’s District Attorney, California’s Attorney General, and currently serving as the only Black woman in the Senate, the second to ever be elected into that position.

Her mother, a cancer researcher and civil rights activist, partly inspired Harris’s political career and civil rights stances while growing up in Oakland, California. Harris went on to attend Howard University, one of the nation’s most prominent historically Black colleges and universities.

Because of her tough questioning of President Trump’s nominees including Attorney General Jeff Sessions and Supreme Court Justice Brett Kavanaugh during Senate hearings, Harris rose in political clout and to the forefront of the Democratic party.

This led to a presidential bid during the Democratic primary where she notably challenged Biden during the first debate on school integration and California busing laws. Throughout her political career Harris has been fairly moderate with policies that have been challenged in the past by younger progressive voters including marijuana convictions and truancy arrests.

Despite this, however, Harris serves as a bridge between the Democratic party and both Black and female voters within the party. Her age, 55, is drastically lower than Biden’s who at 77 would be the oldest elected to the office of president, a factor in appealing to younger voters.

President Trump’s Campaign staff released a statement saying that the selection of Harris was “proof that Joe Biden is an empty shell being filled with the extreme agenda of the radicals on the left.” 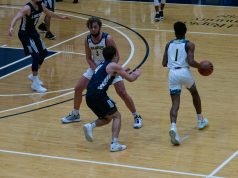