After an impressive, undefeated season resulting in state and regional titles, the Grand Rapids Community College golf team headed to the National Junior College Athletic Association Division II National Championship in Plymouth, Indiana, on Tuesday, May 18 through Friday, May 21, where they finished 11 out of 19 teams.

“Incredible experience,” said redshirt-freshman Tyler Hausserman. “I think all the guys, overall, had a ton of fun, on the golf course, off the golf course. I’d be lying if I said we weren’t a little disappointed in how we finished the last two or three days. But overall, everyone fought hard, everyone had a good time. You know, four or five days of golf in great weather, it’s tough to beat.”

The momentum the Raiders carried into the championship allowed them to finish the opening round of the tournament in fifth place overall, a shot out of a tie for third place at 294.

“We just wanted to approach it the same way we did coming in,” Hausserman said when asked about the team’s mindset after the first round. “Just put your head down and go to work, don’t really worry about anything else, and don’t get too ahead of ourselves out there.”

The second and third days of the tournament saw the Raiders slip to seventh place overall, going into the fourth and final day.

“After being fifth the first day, I thought maybe we would stay right around probably seventh or eighth,” said John Forton, GRCC’s head golf coach. “I thought we were probably the seventh or eighth best team there, but we faltered down the stretch. It’s a long four days of golf, and trying to concentrate for that long of time is pretty tough. 11th isn’t bad out of 19, 120 teams play community college golf, so 11th in the country isn’t all bad.”

“Well, it’s just the culmination of a lot of hard work,” Forton said. “The guys had their sights set on winning every tournament they were in. They worked hard for it. They worked hard in the wintertime at the Golf Emporium and worked hard this spring during practices. So again, it was just a fun ride. I like being with the kids when they’re successful like that, it seems to just grow on them. I think it sets up a good year for next year.”

With the fall season around the corner, the team will be looking for incoming recruits to help fill the void left in the five-man rotation with Luciani transferring to Aquinas College. Hausserman is also currently undecided on if he is returning or transferring. Through it all Forton is confident about the team’s future.

“Well, they’re excited about getting back there next year, they’re already planning their fall tournaments,” Forton said. “So I anticipate with the new recruits coming in, I think we have most of (our players) coming back, all but maybe (Luciani) definitely won’t be back and (Hausserman) is thinking about it. So if we can get the return of (Hausserman), and get these other guys going with some new recruits, we should be pretty strong, even without (Hausserman). I think we will make another trip to the national finals.” 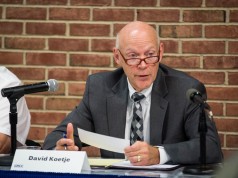