Never have I ever wanted to attend Grand Rapids Community College.

If we were to be playing this game of “Never Have I Ever” with a group of people where every person playing holds their hand up, and each person takes a turn sharing something they have never done. If anyone in the group had done the action they put down a finger until you run out of fingers and the game is over.

Two years ago my finger would not have gone down.

As a teenager, I grew up in a community where you’re surrounded by students who worked hard in school to earn grades that would help them get accepted into universities and colleges such as The University of Michigan, Northwestern University, University of Notre Dame, etc. It’s clear to most stuck in the “bubble”, that going to a community college – isn’t an option.

Adults will tell you, “to stay home for a year, save your money! Find what you truly want to do with your education to prepare you for your future.”

“Trust me, going to a community college for a year is the way to go.”

“You’ll be saving so much money, you’re going to be so happy with the tuition bill!”

“Why spend the money when you are getting the same education?”

But would I be getting the same education?

A DEADLY VIRUS KNOWN AS COVID-19 HAS SPREAD…”

In March 2020, we were sent home. As seniors, we thought this was a great opportunity to give ourselves a break, catch up on lost sleep and finish up college applications. We fully intended  to return back to school after that week.

But we never returned.

As COVID-19 began to worsen, seniors now had college to look forward to as our commencements and other festivities of senior year were no longer going to happen. I, an excited new freshman planning to move out of state, was ecstatic for the new experiences and memories I would be making in my first year of college, but that was soon brought to a halt. 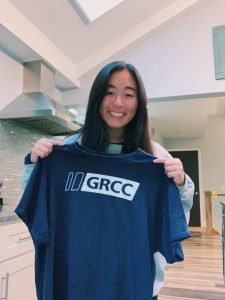 In July 2021, my parents decided that I should stay home for a year because of the pandemic. Everything felt as if it was falling apart, and now I had to attend GRCC.

My plan was simple. Take all the classes I needed to take in order to transfer to my four-year institution. Obtain 30-plus credit hours, take all the required classes under the Michigan Transfer Agreement, pass the classes. In and out.

I quickly learned after two weeks at this two-year college that it really wasn’t as bad as I had made it seem in my head. In fact, it wasn’t anything like  I had previously thought.

I really was getting the same education as everyone else. I look back at my stubbornness and think to myself, “It really took me having to attend the college in order to change my opinion.”

You are able to do so much at GRCC, and if I had opened my eyes to the possibilities, I could have taken advantage of so much more that was offered. GRCC has shown me that you can save money and go to college, you can take classes that are taught at the college level and you can graduate with an associate’s degree that can take you far in a career. Most of all, community college does not limit your abilities, nor hinder your academics. GRCC is the best place to start for someone who wants to save money and still get an incredible education while also figuring out what they truly want to do with their education that will help shape their future.

Being in the position I am now, I know that GRCC would have been the best choice for me to start off with. So many students figure that staying home for another year will hurt them academically. But truly, it won’t. I am leaving this college knowing that students who attend Grand Rapids Community College are not dumb, but are the smartest kids, because they realize that college is expensive. These students were given a path with two roads. One road that showed them freedom, life on their own without parental guardians, a large tuition bill, college life, but they decided to take the path of resistance, not knowing what would lay ahead but found that as they walked down the path they would be saving money, getting a fantastic education and a college life they never expected at a community college.

Before, I was ashamed to call myself a Raider. Now, I leave proud to have attended one of the best community colleges available to me, and I’m beyond thankful to have gotten the experience I did.