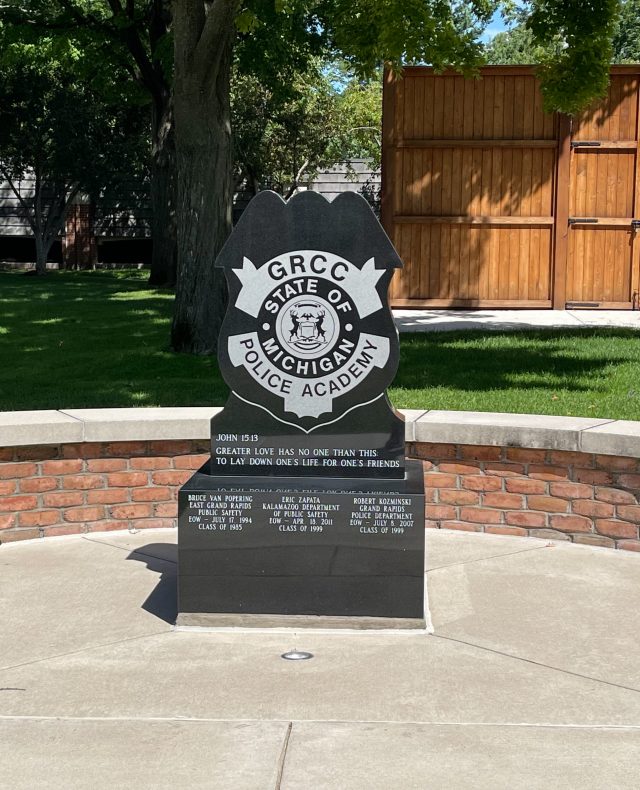 Police officer training procedures have been in question following the death of George Floyd on May 25, 2020, at the hands of Minneapolis Police Officers, resulting in calls for defunding and reform. While the process of receiving a badge differs from state to state, read on to learn what you can expect as a cadet at the Grand Rapids Community College Police Academy.

Once a student has completed the necessary courses for enrollment into the academy, They can begin the application process. After the application is sent, the GRCC Criminal Justice office begins reaching out to potential cadets for oral interviews. If a candidate is selected to join the academy, which begins in the fall semester, they will receive a letter in the mail.

Upon entering the academy, recruits are under the tutelage of Jermaine Reese, the director of GRCC’s Police and Corrections training academies. After filling out the required paperwork to be sworn in as a police recruit with MCOLES, Reese begins laying the foundation for the cadets’ journey into law enforcement.

“My primary role and the way I have an impact on the students is by changing and setting that culture, creating an environment that’s conducive for the change that we need in law enforcement to grow and flourish, and that starts on day one,” Reese said. “Their orientation, before they even sit in a classroom, we spend the entire day, part of that day is allocated towards their licensing bodies, but the other part, we have some in-depth conversations, so their journey starts then. Before they even start the academy, they’re having discussions about bias, cultural competency, even then, we’re talking about messaging. We’re talking about how those messages shape and affect your decision-making. So before we even discuss or use the words implicit bias of de-escalation training, we’re already setting the foundation for them to be able to engage in conversations in an open manner and to learn.”

Reese said he believes it is important to begin these discussions, prior to any other training, in an environment free of judgement for cadets to understand that policing is service-oriented.

“One of the things that I always taught in the classroom is that there is one race of people, and that’s the human race,” Reese said. “We have more in common than we do that separates us, and that’s the message that they get before they start learning any legal, before they start learning subject control or defensive tactics, before they do any firearms training. One of the things that they constantly hear from that orientation, until the day that they graduate, is you don’t get to pick the people that you serve. I don’t care if that person comes from a lower socioeconomic status or they live in a very affluent community, everybody deserves and has the right to be treated the same and equal. Regardless of what a person’s circumstances are, that’s still a human being, and if you can’t see that person as a human being, then you don’t need to be in this profession.”

While creating an open environment for learning is important for the GRCC Police Academy, Reese says for change to occur, it is also important to be intentional with recruiting.

“With that culture being fostered, bringing in and being intentional about recruiting individuals who reflect the greater community. Making sure that we have representation of the overall community, helps us to engage in the theory behind the contact theory, because now you’re forced to interact with people who are different, you’re forced to see them different, to learn from them and hopefully over the two semesters that they’re here for their police academy training, then they get to know, appreciate, and even look at each other as family. Whereas they didn’t know something about this cultural background, maybe now they do, and they have a better understanding of it, and then they’re better people because of it.”

During the academy in addition to classwork, recruits will experience firearms training, tactical first aid, emergency vehicle operations courses, along with de-escalation training. However, according to Cadet Troy Mangrum, although a typical day starts ‘bright and early,’ he hoped to experience more scenario training.

“It’s pretty regimented,” said Mangrum, 37, originally from Northern Illinois. “We’ve run, not as many scenarios as I would like to see, but we’ve run quite a few scenarios already. In addition to that, it’s all the class time. They started with the basics, and they’ve kinda got into the intermediate things, and now we’re into the advanced things, getting towards the end of it, and really preparing us for this career.”

With the rise in mental health awareness throughout the country, GRCC has implemented training for cadets regarding recognizing and de-escalating mental health issues on the job. However, without prior knowledge of an individual’s circumstances, Reese says it can be difficult for officers to identify mental health crises.

“In policing, the thing is, ‘what does mental health look like?’ People have, when I say people, the general society, they have this misconception that you’re able to look at a person and say, ‘okay, well this person’s got a mental health disorder,’” Reese said. “Now, your role as a police officer is to find out what resources that individual needs, because if a person is suffering from contaminated thoughts, your second question is, ‘is this a criminal matter, or is this a crisis issue.’ Where now, if it’s crisis, if it’s not criminal, now I need to be working towards resources, ‘what resources do I have available,’ ‘what resources are there in the community’ to where now I can deploy those, to where now this individual can get the help that they need, as opposed to being introduced into the criminal justice system.”

The current class of cadets in GRCC’s Police Academy are set to graduate on Aug. 27, with a new academy starting once the fall 2021 semester begins. However, Reese will not oversee the next group of recruits, as he prepares to transition to a teaching position at Henry Ford Community College.

Although Reese will be leaving GRCC on Sept. 4, he believes the change in law enforcement starts within the mind of each individual recruit.

“That’s what’s really gonna change when you talk about law enforcement, is the work that happens here, the work that happens in the mind of an individual,” Reese said. “One of the conversations that we started this year is emotional intelligence, emotional discipline. That was something that I wish I knew about back in 1996, or had that training. One of my challenges to every recruit is that you’re better than the sum total of all of your instructors, you take the best of every single one of us and then you go out and do a better job. And you should be better because you’re the beneficiary of all of our experiences.”

For Cadet Arianny Munoz, the message of Reese and other instructors at the academy has come through loud and clear.

“Without these instructors, we’re nothing and neither is the academy,” said Munoz, 23, originally from the Dominican Republic. “They are the ones that have been through this – what better than to learn from someone that has experienced this. So I think the instructors are a big part of our academy as well as our director. Our director is a person that we can approach, he’s an awesome person and willing to help us in any area. Having a nice squad is also very helpful, so I would have to say with all that, the academy prepares you very well to send you out there. Any other job you don’t really know what to do until you practice it or go through it, the academy is doing exactly what it should to prepare anyone.”

“What we’re considering, we’re having conversations right now with our municipalities that are around us, so City of Grand Rapids and City of Wyoming being the first two at the table. We want to bring in other municipalities as well, to have conversations around what it is we need to be providing you as a municipality. The one that is on the front burner right now that we’re strongly considering is fire science. So the notion of and the question of whether or not we need to be preparing firemen for Kent County and surrounding. What we will look at, look at, consider in the future is how do we, GRCC, how do we continue to partner with these municipalities as the community college to see what they need.”

Although these additions are a ways off, Reese believes real change starts when our entire society begins to work together.

“Then you’re changing the attitude or the perception that other people have, either about the police academy program or about the law enforcement profession,” Reese said. “We all have a responsibility, journalists, media personalities, police officers, if we all just stopped and realized, ‘hey we all have a role in making our society better, what role do I play, and how do I assist you in doing that, so that you’re successful.”