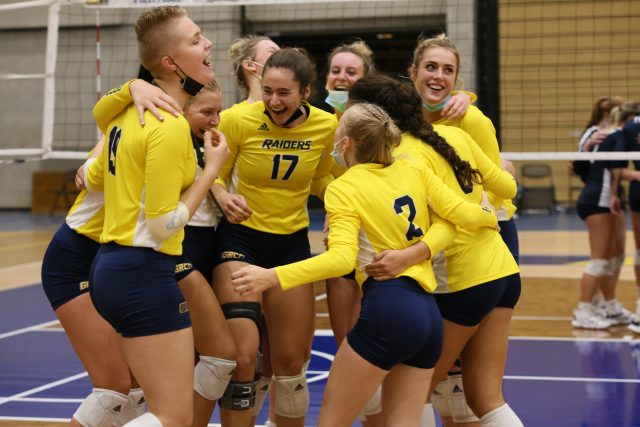 Holesinger also received first-team All-Conference, All-MCCAA and All-Region. Holesinger led the team in kills (346), blocks (73) and hitting percentage (.322). This was Holesinger’s last season with the Raiders after being a part of the program for three years.

“These three years have been the best years of my life,” Holesinger said. “I’ve met some of my life-long friends while being surrounded by the best mentors around.

“This season meant more to me than any other season I’ve had before,” Holesinger added. “These girls and the work we put in will always be (something) I will never forget. They will do very well the next couple years.”

Freshman Audrey Torres bursted into the scene this season, being the only Raider to start in all 31 matches. She led the team in service aces (50) along with placing second overall in points (373), kills (302) and digs (297). Torres received first-team All-Conference, All-Region, All-MCCAA and All-Freshman Team.

“It feels amazing receiving these awards,” Torres said. “They mean so much to me knowing that all my hard work and dedication was seen and recognized.”

Torres also felt that this season was very special because of the people she was surrounded by, which she believed led to the team’s success.

“This first season at GRCC was definitely one I’ll remember for the rest of my life,” Torres said. “We all had such a good bond and our team chemistry was insane. My teammates helped shape me into the player I am and I’m so grateful that they pushed me to be the best version of myself on and off the court. I can’t wait til next season.”

Freshman Ola Nowak also received first-team All-Conference and All-Freshman Team. Nowak was the only Raider to play in all matches and sets during the season. She led the team in digs (396) and digs per set with 3.57 average, while also having 412 assists (second) and 38 aces (third).

Freshman setter Shannon Russell received second team All-Conference. Russell was a reliable setter for the Raiders as she led the team in assists (740) along with 174 digs (fifth) and 44 aces (second).

Sophomore Kylie Oberlin finished her Raider career strong by receiving second-team all conference honors with 160 kills, 67 blocks and a hitting percentage of .177.

Redshirt-freshman Kara Hecht and freshmen Karissa Ferry and Eliza Thelen received Honorable Mention All-Conference. All three Raiders were a big presence at the net. Hecht had 175 digs and 125 kills, Ferry had 136 kills along with 70 blocks, and Thelen was a strong presence off the bench with 82 kills, 34 blocks and a hitting percentage of .250

The Raiders had an impressive season as they finished 24-7 overall and a perfect 14-0 conference record. Through the regular season, they held an 18-game win streak. The Raiders were MCCAA Western Conference Champions, MCCAA State Champions, and were runner-ups in the MCCAA Region XII Tournament.