Sometimes it’s hard to remember just how dependant people have become on technology to stay in touch with one another.  This March the GRCC Players are presenting the quirky and hilarious comedy, “For Better” by Eric Coble, and taking on the idea of love and marriage in the modern world where people are only a phone call away.

The play centers on the lives of old friends and family members separated by careers that have them spread out across the world, but they stay connected by technology: mobile phones, instant messaging and email.

The timeliness of the play makes for an insightful look into how reliant we as a society have become on using technology to stay connected. 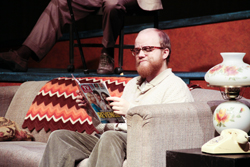 The character Karen (Brooke Purnell) has just been engaged to a man named Max.  She’s only actually seen him a handful of times but has established a bond with him through phone conversations.  Her father Wally (Henry Marcusse), who is still put off by the idea of a technological world, has never even met Max and is quite baffled by the whole idea.

As Karen begins the process of announcing the news to her friends and family, the audience gets a look into the lives of all the characters: Karen’s sister Francine (Aubrey Pierzchala), who slaves for an ad agency while her husband Michael (Kyle VanDyke) travels the U.S. as an insurance salesman; her friend Lizzie (Kendra Jones), a web designer; and her old friend Stuart (Ryan Hiltunen) who flies all over the globe working for who other than “Verizon Wireless.”

The news of Karen’s engagement creates a buzz among her friends and family.  As the drama unfolds, the audience gets to – while the characters may not even be in the same room, let alone the same country – how much people can still be bound by their relationships to each other.

For the character Wally, Henry Marcusse takes on the role of a much older man and sets up the contrast for the play’s theme of a new world of connection through technology.  He struggles with his newly bought “TiVo” and takes twenty minutes to send out a simple email to his children.

It’s difficult to imagine watching a stage show where the majority of the characters’ interaction is done over phone or even through instant messaging, but it makes for some funny spitfire dialogue.

“Normally when you’re in a scene with someone else, it’s easy to focus on the other character,” said Aubrey Pierzchala who plays Francine, discussing the challenges of acting out phone conversations on stage.  “But you can’t see them, you can’t read their facial expressions so you have to listen to every word they’re saying,”

“The biggest challenge (directing the show) was pacing, and making sure there weren’t any ‘traffic-jams,’” said Director Shelly Urbane: meaning keeping the actors and actresses from stepping over each other during the spontaneous entrances and exits (and in this case phone calls) on the stage and during dialogue.

The GRCC Players are without a doubt a tightly knit group brought together by their shared love of performing.

“For Better” will be the first performance with the GRCC Players for both Brooke Purnell and Ryan Hiltunen who plays Stuart.  “It’s been a lot of fun and an awesome experience,”  Hiltunen said.

This will be the third play with the GRCC Players for actor Kyle VanDyke.  “Every rehearsal and play is a rewarding experience; the hard work pays off,” VanDyke said.  “(The reward) is in the friendships you make and the lives you touch.  It builds strong bonds with people and if you get to entertain people for the night, that’s pretty damn fun.”

“Audiences will have fun with it (the play),” Urbane said.  “But I do hope some people walk away and think oh my gosh, we do need to talk more and not just over the phone and connect in other ways.”

Be sure to get to Spectrum Theater for the GRCC Players performance of “For Better,” and please remember – cell phones off.