It started with such potential, such promise. A beautiful opening introduction that transitioned into the song “Some Nights.”

It had everything you would expect from a Fun. album. That voice. That guitar. That auto-tune. Wait, what?

Everybody stop what they are doing…. Fun. did what? It’s true, mixed throughout the album, Fun. made the mistake to throw in the always terrible auto-tune which was made famous by the talentless rapper T-Pain. It may not be heavy usage of the auto-tune but anything really is too much.

Although the auto-tune disaster did put a damper on the album, Fun.’s second album, “Some Nights” is worth the listen. 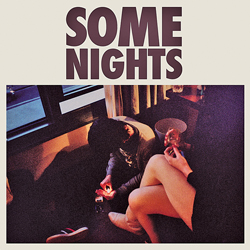 Following its debut album, “Aim and Ignite,” “Some Nights” has the different elements avid listeners have come to expect from the band.

The album kicks off with an introduction to the title song “Some Nights” which is a fun, playful song centered around the voice of Nate Ruess, former lead singer of The Format.

For those who haven’t heard Fun., Ruess’ voice closely resembles the voice of Canned Heat’s Bob Hite only with more soul and attitude. The music is playful, upbeat, and well, fun, but it is also mixed with the darkness of infidelity and life’s struggles.

In what appeared to be an attempt to make up for the auto-tune debacle, Fun. went above and beyond with the monumental classic “We are Young.”

With its slow drum beat and clean piano, the song builds and builds as the band layers in more instruments and voices.

The song features Janelle Monáe as the back-up voice and if I may offer a word of advise, listeners would do themselves a favor to crank up the volume and let the music consume them.

“It Gets Better,” the fifth song on the album, features a sound that resembles Blink-182’s early style. Driving drums, simple guitar riffs and the voice to match it, it felt like I was listening to Blink-182’s “Take off your pants and jacket” more than Fun.’s new album.

In “Why Am I the One,” the band throws string instruments into the mix to add another dimension to the album.

As is the case with most albums, this has a dark horse song, one that seems mediocre at best at first listen but transforms the more it is listened to. For this album, that has to be “All All Right.”

The song isn’t overly complicated but it’s shocking to think that a three person band can create the sound this song has.

The last two songs on the album, “One Foot” and “Stars” round out the album with two good songs that continue to showcase the variety of songs available on this Fun. album.

With Nate Ruess on lead vocals, Andrew Dost playing almost every instrument imaginable, and Jack Antonoff on guitar, this ten song album has the elements needed to be a fan favorite for years to come.