In his first season as the Raiders men’s head basketball coach, T.J. Carnegie guided the Raiders to the playoffs.

After closing the season with a three game winning streak, the team won their final game against conference rival Jackson Community College. The Raiders had momentum heading into the post-season.

But that momentum would quickly be derailed as the Raiders lost in the first round to South Mountain CC 76-61 after a second half surge was just too much for them to handle. 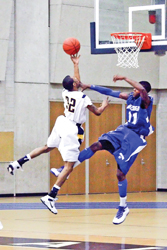 South Mountain ended the game on a 15-2 scoring run as the Raiders failed to score a basket in the final 4:34 seconds of the game.

The loss sent the Raiders to the consolation bracket, but that didn’t stop the team from continuing to fight.

The Raiders were then paired up with Bismarck State College. GRCC edged Bismarck 82-79 after Alex Lyle scored a game winning three pointer on an inbound pass with 12.4 seconds left.

Lyle, who had been held scoreless in the game against South Mountain CC, finished the game with 15 points.

The Raiders would advance to play Danville Area CC, but lost 62-54.

The Raiders finished the season with a 20-12 overall record (including playoffs). Despite not achieving the ultimate goal of a national championship, Carnegie and the Raiders have something to build off heading into next year.