Identity cannot be separated from poetry.  When a poem is created, a bit of the author is drafted into the writing. 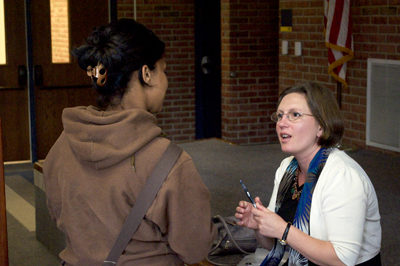 Her family came to Grand Rapids after her father’s imprisonment then banishment.  He was imprisoned for spreading pro-democracy pamphlets, written on a typewriter that he buried each night to evade the police.  It was  this act that inspired Carmen Bugan’s memoir, “Burying the Typewriter.”

She wrote the book in the voice of a five-year-old, wanting the perspective of a child.  She wanted to show what it is like to grow up in a totalitarian regime in which she did not understand her parents’ actions or the political context.

“Children can feel more, even though they understand less,” Bugan said.

It was her family’s relocation in Grand Rapids that began Bugan’s immersion into poetry.  Taught by David Cope, GRCC Professor and Poet Lauriate of Grand Rapids, Bugan wrote her first poems.

Bugan decided to write all of her literary work in English.  After the horrors she endured in Romania, she was ready to forget her past.

“In this way I banished Romania and the language from my life,” Bugan said. Yet, she did not forget.  While trying to omit her native language, all she could write about was her memories in Romania.  Even later, at Oxford, while telling her husband how Romania is a polluted country, she found herself singing Romanian ballads to her pregnant belly.  When her son was born, she recited the prayers of her grandmother to him.

Through all of the suffering, she still had very blessed memories of her childhood country.  On the farm with her grandmother, she was with her family and they were happy.  Her childhood is a part of who she has become and what she has accomplished.

It took both places in the world to bring her poetry together.  It is a stark contrast in lifestyle, but her experiences are what make her poems special.

The rare quality of her poems is well-recognized.  Bugan is a winner of the prestigious Bakeless Prize, and her work has been published in Harvard Review, Modern Poetry in Translation, PN Review and The Times Literary Supplement.

Her childhood gave her memories; her education in Grand Rapids gave her a voice.

“The writing puts order in your life, and then your life makes you write,” Bugan said. “The happiness in the last 20 years, the gratefulness that we felt, that I feel, towards the English language. I have come into identity, as a free human being, and I succeeded.  This order, this good life that we’ve had here, has helped me order the material in my writing.”