The Calkins Science Center is home to astronomy, biology, anatomy, and physics classrooms, but it is also home to Grand Rapids Community College’s own dinosaur era garden. “Garden for the Mesozoic Era” was funded by the Wege Foundation, Frey Foundation, and GRCC in Nov. 1999. It is located on the third floor of the Calkin’s Science Center near the Biological Science Department offices. This trip back in time was designed by Stephen J. Rosselet, who is known for his work at Fredrick Meijer Gardens.

The Mesozoic Era was an era that consisted of three time periods: Triassic, Jurassic, and Cretaceous. This era of Earth’s history is famous to most of us because it was during this time of the dinosaurs. The plants in the garden are many of the same plants that grew among dinosaurs.

Inside this garden, you will see a variety of plants such as a Ginkgo tree, a Tulip tree, Sweet Flag, and Dwarf Horsetail to name a few. Most plants in this garden are not native to Michigan. Butterfly Koi and frogs also inhabit the area along with an occasional squirrel.

According to Rosselet, the garden was built “to educate, enrich, enchant, and inspire.” Rosselet added small details everywhere and took precarious time detailing the specifics of the garden.

The tumbled flagstone path is made from rocks mined from a Michigan quarry. Each stone lining the edge of the pond was handpicked because of unique characteristics such as imprints of fossils. Large rocks called Concretions were mined in the thumb of Michigan and chosen because they resemble dinosaur eggs. Originally, Rosselet wanted Gar Pike instead of Koi to inhabit the pond because they were present during the Mesozoic Era. However, it was later decided that Butterfly Koi would be more suitable. Information on his ideas and planning can be seen in a map on the wall opposite the garden.

“GRCC decided to build the garden as a pedestrian-scaled quiet spot of reflection on campus, which at the same time showcases specimen plants from the Mesozoic Era,” said Jim Van Dokkumburg, director of Facilities Management at GRCC. “This allows the garden to be both an enjoyable place to visit as well as a link to some of the biology program’s curriculum.”

Robert Long, department head of the Biological Sciences Department at GRCC, agrees with Van Dokkumburg’s and Rosselet’s view on the purpose of the garden. “It was meant to be an intimate and reflective place,” Long said. “A lot of people don’t know it’s back here. People who find it think, ‘I just discovered a secret.’” And in a way, this Mesozoic garden is GRCC’s own secret garden.

According to Long, there were purposefully only two benches placed far apart in the garden so that if two people wandered in, they wouldn’t be in each other’s space. “It’s meant to soothe and teach,” Long said. Many people who wish to simply enjoy the view of the garden sit outside on the couches provided. 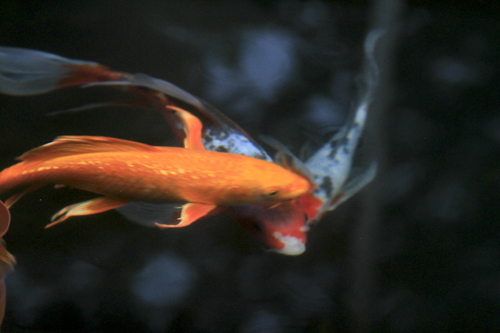 “The idea is to have it look natural,” said Long. Therefore, he doesn’t do much maintenance. The garden is self-mulching, meaning the dead leaves from the trees fall and fertilize the ground, which in turn fertilizes the trees—so the garden takes care of itself. There is also an underground water system that irrigates the plants. Long plans to “try and keep it natural looking,” he said. The little pruning he does, he prunes to look like a forest, not “a manicured garden.”

Since this garden was built, Long says it has matured a lot. “It’s almost at a time to re-conceptualize,” he said. The trees have grown very tall, creating a canopy and a lot of shade for the plants beneath, some who are struggling for sunlight. Soon, Long has to make decisions about whether to plant new plants that don’t need much sunlight, or simply allow the garden to keep growing as it is. But whatever he tries will be “an experiment, like anything else,” he said.

During every season, Long attests to the beauty of the garden. The stream continues in the winter and some trees keep their green leaves. In the spring, beautiful magnolias, green buds and blossoming flowers can be seen. “There is always something of interest,” Long said.

(However, be careful because sometimes the door locks behind you!)