This month the (106) Gallery on 106 South Division Ave pays homage to the little things that make up our daily lives with the “Found” exhibit.

The exhibit showcases notes that slip out of pockets, to-do lists left behind, notebooks abandoned, forgotten love letters and photos fallen to the way side, only to be found, sealed and sent to Found Magazine, a publication that began ten years ago as a way of collecting and displaying all of this found material that had a personal narrative. 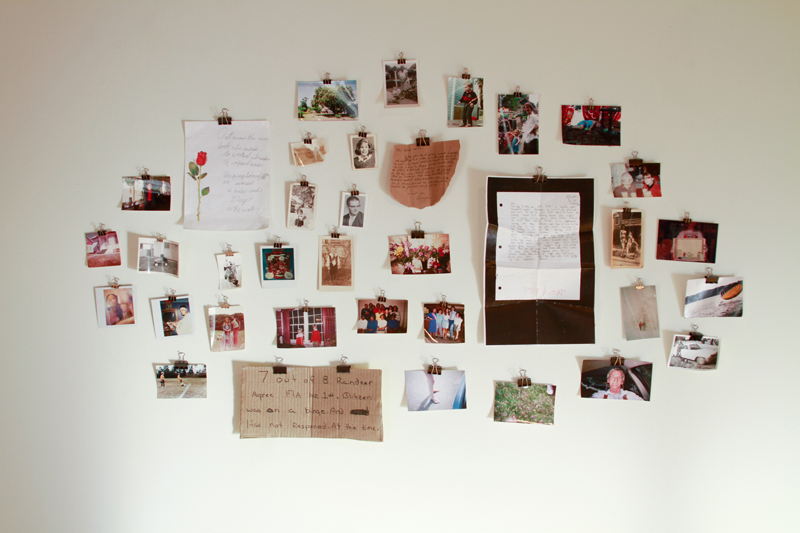 In 2000, magazine founder Davy Rothburt was getting in his car in Chicago when he noticed a note left on the windshield, a note that was addressed to a person named “Mario” and written by a very angry woman. Davy and his brother found the note to be so humorous yet moving that they shared it with everyone they could. This inspired a movement of sharing found items.

27 year old Sarah Baker works as the gallery coordinator and curated the exhibit after meeting the magazine founders Davy and Pete Rothbart at the Found vs Found show hosted by the UICA last year. The three got to talking and came up with the idea of doing an exhibit.

“We kept in touch, and basically they sent me boxes of found photos, doodles, flyers, anything,” said Baker. “I originally talked to them about sending all found things with letters from the finder, but I got a lot of packages of found photos without letters and they intrigued me.”

Baker displays these photos on the walls of the gallery in grids, as well as hanging them from the ceiling in clumps so that people may inspect each one. “There isn’t necessarily a narrative because they all come from different sources.”

After spending so much time searching through boxes of found items and considering them for the exhibit, Bakers voice perks up when asked if she has a favorite. “My favorite is the journals; there are two journals written by a guy named Eric that someone found. He is obviously a young, 20-something college student and he writes the most hilarious things about his daily life.” The journals are displayed on pedestals’ in the gallery.

The exhibit will intrigue those looking for a non-traditional art experience.

“I like the show because it is not a single artist or even a group of artists, but a collection of material created by a people and found by others. There is a community aspect to it,” said Joel Swart, Director of Exhibits for Calvin College.

The gallery is open on Wednesdays from 1-9 p.m., Thursday-Friday from 1-6 p.m. The show runs through Nov. 18, when the gallery will host a Found Live Show put on by the Rothbart brothers, where they will bring new found material, have live readings of Davy’s new book My Heart as an Idiot, and will even perform songs inspired from specific found items.