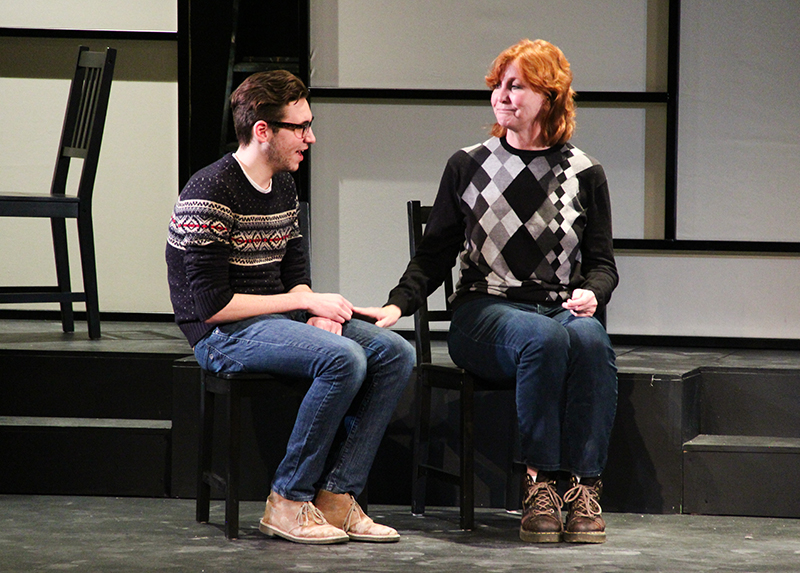 The GRCC Players will be performing the play “Based on a Totally True Story” Feb. 28 March 1.

Written by Roberto Aguirre-Sacasa and directed by Rob Karel, the play is about a young playwright, Ethan, living in New York, who is also the author of “The Flash” comic book series. A Hollywood producer approaches him with an offer to make one of his most recent plays into a movie. Ethan deals with Hollywood’s demands, family trauma and a partner caught in the middle.

“It deals a lot with the art of making art and the sacrifices that have to be made as an artist,” Karel said. “I think anyone who is in theater or in any kind of art form can really connect with the piece and the theme.”

Robbie Ellis, who plays Ethan, was attracted to the play when he first heard about it.

“I was in my theater class and I saw the audition dates and I thought it was interesting, so I went and got the script, read through it and was interested because the character was like me in certain ways and in other ways he wasn’t,” Ellis said.

Kyle VanDyke, playing Ethan’s father, also sees some similarities between himself and the character he’s portraying.

“Ethan’s dad has a gentle aspect to him, a real caring side. I think that transcends from me a little because I’m kind of the older one in my group of friends,” VanDyke said.

Karel said casting for the play was not a difficult task.

“Casting was not difficult. Actually, we had the opposite problem, where we had more people show up than we could use,” Karel said.

Performances will be held at 8 p.m. at the GRCC Spectrum Theater, located at 160 Fountain St. NE in Grand Rapids.

Tickets are $3 for students, $5 for staff and $10 for adults. Tickets can be purchased at the GRCC Spectrum Theater box office or online at cms.grcc.edu/theater.