Grand Rapids’ sinister and spooky past is illuminated in the newly published “Ghosts of Grand Rapids.” The book, by Nicole Bray and Robert Du Shane with Julie Rathsack, examines local hauntings and reveals the truth behind some long told urban legends.

“The research took a good year and a half,” said author Nicole Bray. “We spent a huge amount of time—countless hours—on the local history floor of the public library…hours and hours looking through lithographs, death certificates and walking through cemeteries to verify names and dates.”

That dedicated research is what sets the book apart. Numbering 128 pages, the book is full of dissected local history. 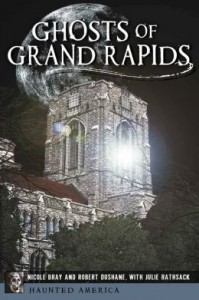 “You can pick up tons of books on hauntings in Michigan, and it’s all just a repeat of what you can find on the internet. We dig deeper,” Bray said.

Locations covered in the text are extensive and includes the entire downtown area and as far as Ada, Rockford and Algoma Township. In the text, Bray presents the truth about the AT&T Building, one of the most well known Michigan haunts which stands on the former site of a home where a brutal suicide pact was carried out. An entire chapter is dedicated to delving into the rich past of Heritage Hill, it’s former residents and the string of chilling murders that took place in the neighborhood during the 1970’s and 80’s, while another reveals the origins of the hauntings at McFadden’s and The Ritz Koney Bar and Grille, the site of Grand Rapid’s oldest unsolved murder, and the other worldly activity at St. Cecelia Music Center.

Many know that the city was once a booming furniture town, and a lot of the buildings downtown once served as hotels and boarding homes for those passing through on business, where many suffered unfortunate deaths. For instance, outside of the Morton House, which was once the Morton Hotel, an unlucky maintenance worker was decapitated by a newly installed luggage lift. On the corner of Division and Fulton once stood the Livingston Hotel, which was torn down after a deadly fire of unknown origins, that the press referred to as a “nighttime holocaust,” ripped through the building, claiming lives and horrifying the city.

“Ghosts of Grand Rapids” is the fourth in a series by Bray and co-author Du Shane, whose previous books explore ghostly activity in Lansing and Kalamazoo. Bray founded the West Michigan Ghost Hunters Society in October of 1999 after a life long interest in the paranormal. The Grand Haven resident grew up in Ionia, in a house that was haunted.

“As a kid, I knew there was something wrong with the house,” Bray recounts. “I grew up seeing my dolls fly across the room.”

WMGHS currently has six members and explores historical sights for evidence of hauntings and also conducts home investigations, which are often kept off record in order to protect the privacy of their clients.

For Bray, the experience of writing the book and delving into the truth behind things that go bump in the night was an exciting one.

“I really enjoyed writing about the Michigan Bell Building (now the AT&T Building) and finding the truth behind that legend. When I started the team back in ‘99, that is what everyone talked about,” Bray said.

“Ghosts of Grand Rapids” aims to advocate for the facts behind reported paranormal activity in the area, something that is made apparent by the sections that are devoted to the debunking of myths that over the years have served as the mastheads of local macabre lore. Fear not, as the authors prove here that the truth is far more chilling than fiction.