Watch the video of the event.

They came in with suitcases. Everyday guys, dressed in sweatpants and hoodies, hauling in  oversized luggage loaded with supplies. Out of these suitcases came wigs, dresses, nylons, eyelashes, and make-up of all kinds. As these men began to file into the dressing room it became clear that these weren’t just everyday people, they were entertainers.
Earlier this fall, West Michigan’s very own drag queens arrived at Grand Rapids Community College determined to put on an incredible show.
They glammed up and put on lipstick smiles even though they face judgment and constant criticism from society for doing what they do. And yet they continue to do it. They say you never really know someone unless you walk a mile in their shoes, or in this case, heels. And on October 25, 2013 that’s exactly what I did.
This story is about my experience being part of Fearless, a community drag show sponsored by GRCC’s StandOUT club, a gay-straight alliance that promotes equality for all.
In preparing for the event, I knew I wasn’t going to be able to accomplish this by myself. I knew that in order to look the best, I had to learn from the best.  Dakota Main has been doing drag for almost two years. Growing up in a small town in northern Michigan, Dakota’s family hasn’t had much exposure to a gay culture let alone to drag. “She really didn’t know about the whole drag concept,” Main said about his mom. “I had her come for a show one time and have her experience it so she can know exactly what it’s all all about. She said it’s an entire world that she’s never imagined or seen before.”
Stage names are essential for all drag queens.  Inspired by his role model, Madonna – with whom he shares a birthday – Dakota performs under the name Donna Delight, Likewise, I, was inspired by my role model, Cher. Coming up with a name was pretty easy. Some of my friends (even some co-workers) call me Claytina. (Working in customer service, you can’t be nice all the time!) Since I was working on a first person story for the GRCC newspaper, I settled on Claytina Collegiate. My next task was figuring out what to wear.

Shop Until You Drop 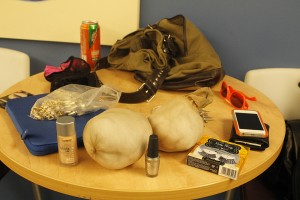 Before Dakota and I went shopping, we went through his clothing collection which took a while. With more than four plastic tubs and an entire closet filled with wigs, dresses, shoes, and so much more Donna Delight gear, I was surprised there was something he didn’t own. We were able to find a leather jacket that fit me before hitting the local shops.
I thought that the shopping was going to be the least of my worries, but not quite. The first stop was Wig Beauty Supply on 28th Street in Grand Rapids. When the door opened and Dakota and I walked in, I immediately began to feel out of place. Dakota reassured me everything would be fine, and that they knew who he was and that he did drag. The first thing I began to notice was the price. I saw wigs that ranged from $50 to $200 and I’m sure some went even higher. Still feeling overwhelmed, I picked up what I thought was “Cher hair” and tried it on. Impressed with the way it looked I brought it to the counter. Almost $70 later, I walked out of the store with my very first wig. That’s the price of beauty, right?
Next we stopped at Rivertown Crossings Mall to shop for shoes and a pair of leggings. Dakota and I walked into Deb and went straight to the back to look for a pair of heels – an experience that made me very uncomfortable. We were two guys shopping for heels in a woman’s store and people noticed. I looked over at Dakota as he was casually browsing the selection but its impossible to ignore the other shoppers in the store staring at us as we are trying on heels. Finally, an associate came over and asked if there was anything she could help us with. I immediately responded, “I don’t know, do you want to?”
“I don’t have a problem with it,” the associate responded.
Although other customers were still staring, the associate’s response suddenly made me feel much more comfortable looking for a size 11 pair of heels.
Once I finally found a pair of heels, my biggest challenge was walking in them. Of his whole experience, getting comfortable walking in heels was the most difficult and even most painful experience. To help stretch them out to fit my feet more comfortably, Dakota advised me to wear the heels while sitting and watching TV or even sleeping if I wanted to. So that’s exactly what I did for a week. I even wore them on campus in The Collegiate newsroom. That advice actually worked. When it came show time, I was surprised that my feet didn’t hurt too bad.
Before the end of the night, we went back to Dakota’s house to make sure everything fit. As I began to try everything on, it became more apparent that arm hair had to go. And if you ever think I’ve shaved the hair on my arm, you are mistaken. After I did, I really didn’t mind it. I feared I would have to shave my legs or something much more drastic. Come to find out, some drag queens don’t even shave their legs! 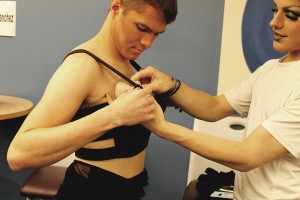 Lights, Hair, Action!
After a week to practice walking in my heels, the day had finally come for my performance.  I arrived before most of the queens and put my heels on and did a trial run of some of the moves I planned on doing. Walking off the stage after practicing, I felt fairly confident that my performance was going to go smoothly.
When Donna arrived, we began the beginning steps drag queens take to get ready. As many would of guessed, yes, I did start out my “transformation” by “tucking” my male parts away. A queen backstage jokingly said “Nobody wants to look like a Mr. Sister.”, I chuckled a little bit. The mood backstage surprisingly was pretty relaxed. I always imagined that behind the scenes of drag shows, queens would be catty towards one another. But as the night progressed, that stereotype quickly went away. More times than not, makeup was being shared and even hairspray. Although to me the environment was very intimidating, I was surprised it wasn’t more intense than what it was.
Underneath two pair of skin tight pantyhose, were my hip pads that literally were shaped like Africa.  These hip pads were to help give Claytina Collegiate a more womanly figure in the legs. Following the installation of my hip pads, it was time for makeup. A solid foundation is crucial in getting rid of any shade of facial hair and help develop cheek bones as women typically have higher cheek bones than men. Donna used both a thick liquid and powder foundation, more make up than I’ve ever worn before, even as a budding TV reporter.

Next was my bra, but this wasn’t a typical bra most women wear. This bra had one strap that went over both shoulders and two straps that went around my back. And stuffed inside were two nylons filled with padding, giving Claytina Collegiate a set of breasts.
The biggest part of my transformation (both physically and mentally) happened next, my face was painted to look like Cher. I had been sent to Adam Johnson, who preformed as Sydney Chablis, a queen that has makeup artistry down to a science. As my eyelashes were painted on and lipstick was applied, my face was really beginning to take shape. The transformation took Adam only about 25 minutes to complete. When I put my wig on and looked in the mirror that’s when it all hit me. I wasn’t Clayton Cummins anymore. I started to feel like a whole new person. It was the first time Claytina Colleigate came to life and I was loving it.
Adam has done drag for 10 years. Like Dakota, Adam grew up in a small town where a gay culture didn’t exist. The Lowell native Johnson picked up some of the tricks of the trade as early as 19 years old and has had the opportunity to work with some of the best people in the country. To date, Adam has done 97 shows and he says practice makes perfect.
Adam’s family took the idea of him doing drag very well, they even went and saw him perform live. “For me, I don’t ever want to be a woman, “ he said. “It’s just an acting job. For my family to kind of see it that way-it makes me very happy. I’m lucky they don’t think it’s some weird fetish like some people do”.
Performing isn’t the only thing that drag queens do, they also give back to the community. “To me there is a lot of reward in it. We usually do Make-A-Wish benefits at The Dunes Resort in Saugatuck where we’ve raised enough money to grant two kids wishes which equaled about $15,000 dollars with a silent auction. You can do a lot of good with this.” 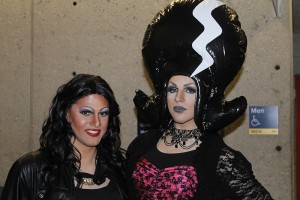 After more than a week of preparation, it was now showtime. As the music began playing the opening bars of Cher’s “Song for the Lonely,” my heart rate about doubled. As I stood up and walked towards the door my hands began sweating as the nerves began to set in. I started questioning my decision to participate, but following a few expletive statements, I was ready to take the stage. While walking out onto the stage I focused on what Cher had said as Tess in “Burlesque” – “Remember if you fall off stage, legs extended and boobs up”. And that was my exact plan.
Many ask me, “So, how was your performance?” I can honestly say I don’t know. I really didn’t remember exactly what I did on stage. My adrenaline was running so high at that point I was just trying to make my lip syncing to the music look good and hoping I didn’t fall down. I did manage to walk out into the crowd a bit and successfully skipped my way back up to the stage during “If I Could Turn Back Time”. I figured that was an accomplishment in itself. As I was walking down the stage, there was a point where the back of my heel hit a spot where two parts of the stage came together and I thought I was going to go down. Thankfully that didn’t happen.
Following the show, I’ve gotten a lot of strange looks as friends have came over. Many have seen the pair of heels and wig hanging on the back of my dining room chair and hesitantly ask, “Clayton, what is that?” I responded, “I got to be Cher for a night and it was fabulous!” After I showed them the video from that night many are amazed that was even me. Now that I’ve walked more than a mile in 5-inch heels, drag queens have my R-E-S-P-E-C-T. Withhold your judgment until you’ve done the same.

Watch the video of the event.