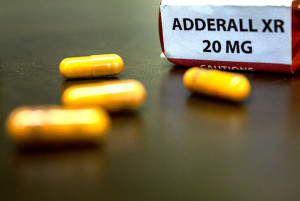 Marijuana, Cocaine, Methamphetamine, and LSD are probably what comes to mind when you think of drug abuse; however, there is an ever growing trend among college students today, who are starting to use Adderall to help boost their study skills without fully knowing its side effects.

Adderall is a heavily controlled class II prescription drug used to help treat patients with Attention Deficit Disorder, more commonly know as ADD, and narcolepsy.  ADD is a disorder which causes hyperactivity and impulsivity, the effect that Adderall has on these patients is increased focus, which ADD patients need because they have very little focus at all and it invariably helps treat all the symptoms of ADD. Narcoleptic patients also use Adderall to help regulate their sleep patterns, because it’s harder for them to fall asleep when they are focused.

There are many people who abuse this medication. Students have found that Adderall helps them focus on their schoolwork and have started to use it to help increase their focus in hopes of getting more work done faster. Unfortunately, Adderall has some rather profound side effects, and rather than going through a doctor to find out what dosage they need, students have been buying it illegally from people who have a prescription; and using extremely high doses to get the desired effect.

Dr. Craig Straley, a professor of General Psychiatric Pharmacy at Ferris State University, is an expert in the field of Psychiatric Drugs. “Adderall is (an) amphetamine, it is speed. It is in the same family of drugs as methamphetamine and cocaine,” he said.

Straley also explained what Adderall did to people saying, “When used by people who are prescribed, like people with ADD, it can help make them be less impulsive, have a greater ability to focus, and some what of a reduction in wild behavior.”

There is a misconception about Adderall, that taking it will increase your grades, which is why many students turn to using it illegally.  Adderall does not actually guarantee better grades, it just increases your ability to focus and remain on task.

Straley commented on students abusing Adderall, “There may be differences in the way a person with ADD and someone without ADD responds to the drug. Those without ADD are probably using higher doses, to get the increased energy and euphoria. These drugs make people feel good, almost a feeling of grandiosity.”

Early on, Adderall can potentially cause insomnia, due to it being a stimulant. The most common problem reported in studies about Adderall are gastrointestinal problems, abdominal pain and stomach upset. It is also an appetite suppressant.
The early side effects are profound, but Straley stressed that the long-term effects can cause serious problems.

“Blood pressure and pulse can increase, which when sustained at a high level, can lead to cardiac arrest, however as long as the person doesn’t have an undiagnosed heart condition, serious cardiac problems like cardiac arrest shouldn’t present themselves. Another long term effect that stimulants can cause are worsening and possibly the presentation of tics; or sudden, repetitive, uncontrollable muscle movements”

Greg* is a supplier of Adderall to college students. “About one-half of my clientele are college students. They usually have a ‘script themselves, and when they run out they come to me. I usually charge people roughly $1 every 10 milligrams.”

When asked about how he acquired his product, he admitted that he didn’t have a prescription himself, but that he uses a network of friends to get it. “It’s really just being in the right place at the right time,” he said. Greg also shed some light on how people without ADD get a prescription for Adderall, “Some people have tricked their doctor’s into giving them a prescription for it.”

Luke*, a former student of Grand Rapids Community College, admitted that he started using Adderall illegally in college, and he now uses it everyday to help him focus.

“It really helped me focus, and helped me get my work done. It gave me the motivation to work and it also helped me with life in general, I really got a lot done when I took it.”

Luke did say that he felt some of the side effects. “The first time I took it, I can only describe the feeling as euphoric. After that, it motivated me to focus and become self-reliant. It does mess with my appetite though; I make a schedule to be sure I eat regularly.” Luke admitted that he got his Adderall from a friend, who suggested using it. When Luke bought it from a supplier, he paid between $3 to $6 dollars per pill.

If you think you might have symptoms of ADD, the best way to go about treating it is to see your doctor. Self-medicating for ADD can be dangerous, not to mention expensive. Abusing Adderall might help you study better now, but it could have negative lasting effects on the rest of your life.