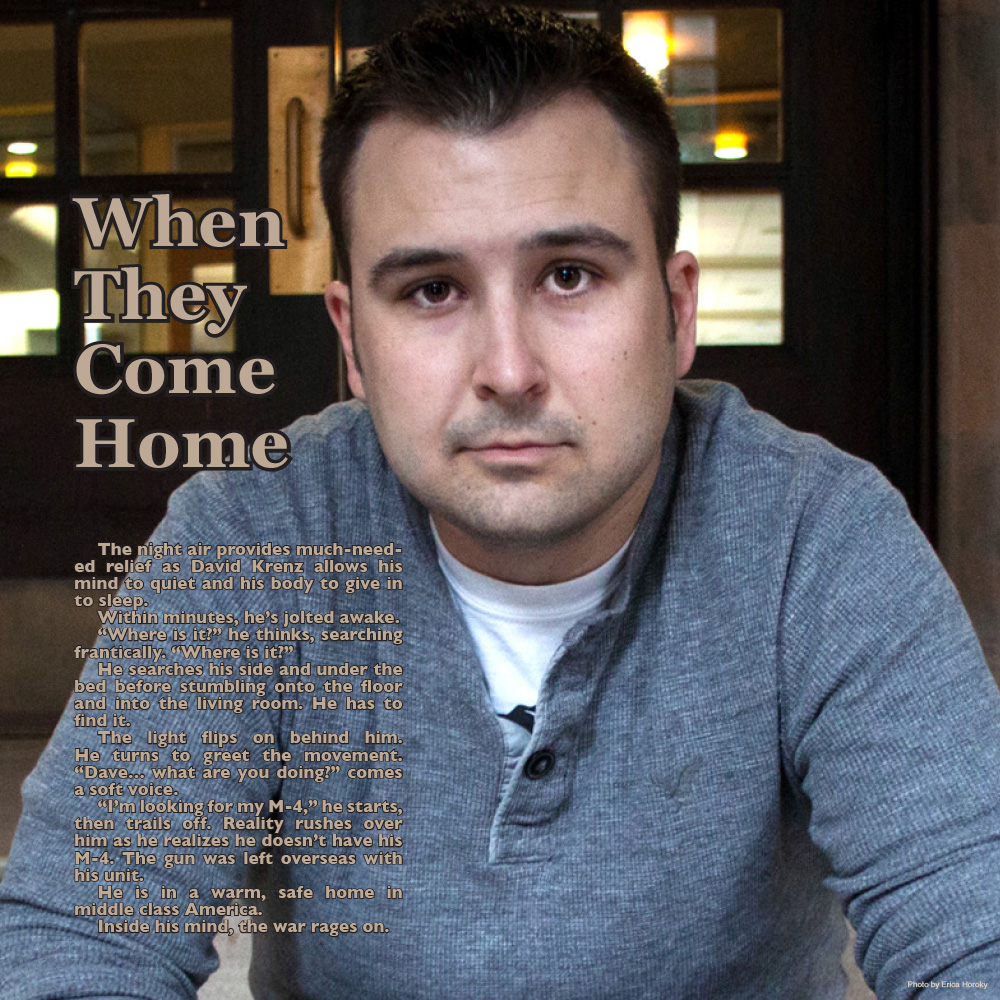 Krenz served three tours in the deserts of Iraq for Operation Iraqi Freedom. Now, nearly five years since his last deployment, the memories remain strong and persistent. He is part of an ever-growing population of service members-turned-civilians who try to re-acclimate themselves to “normal life” upon their return home.

For Krenz, life overseas proved to be much different from life in the United States. But how different is not easily understood by those who have never served.

“It can be difficult because everything’s just so different from the little microcosm which is your fort, or being on deployment. It seems so weirdly free that people can just do whatever they want here, and (we) couldn’t. To have that kind of restriction lifted is scary,” he said. 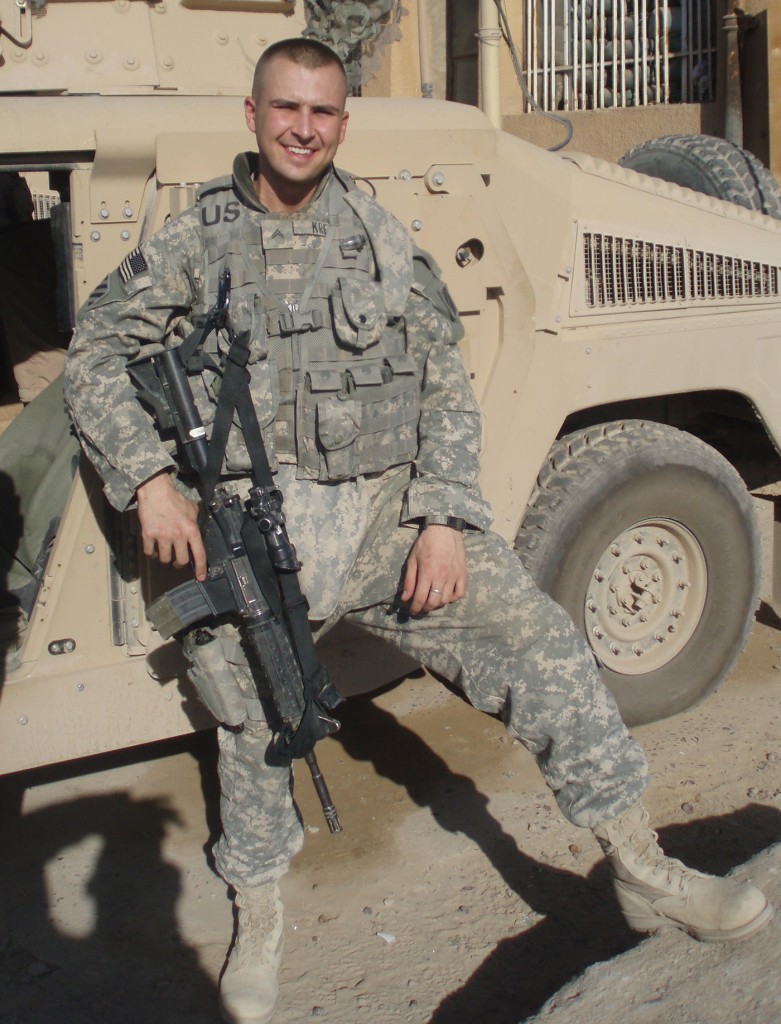 Working as a military police officer for the 3rd Infantry Division, Krenz served in several capacities overseas, including overseeing a prisoner of war (POW) facility. His unit was the first to break ground into Iraq in 2003, with events highly publicized in the media.

Krenz remembers the night the U.S. Army crossed into Iraq. He was young—only 19 at the time, and scared of what would happen next.

“I was lying on the top of my truck, looking up at the night sky… and I saw rockets, just hundreds of rockets streaming in this big, giant wave. It took me a second to realize what it was… and when I did, I was just amazed. I wasn’t thinking about the destructive capabilities or the outcome of what this was bringing. I was just thinking that it looked amazing. I don’t know why, but it made me feel better seeing that.”

That airstrike was the first of many moments that left a profound impact on Krenz. Some of these moments are funny, such as the night a pair of goats somehow got lost in the men’s barracks and caused a huge ruckus among the men. (The goats found their way inside the barracks with perfect ease, yet getting them back out was another story.)

Equally funny was the time someone “accidentally” threw a round of ammo in a pile of burning trash, causing chaos as the shells literally blew up the entire trash can, nearly giving Krenz and several others a heart attack.

Yet ironically, one of the most impacting moments he had overseas was one of peace, not violence.

“There was a time on my first deployment, after we’d gotten to Baghdad, this older lady, maybe late 50s or early 60s, approached my truck. I was in the turret. She tried to get my attention, so I bent over to see what she wanted. She said something to me in Arabic, I don’t know what she said… but she grabbed my hand and put something inside it… and then she walked away.” 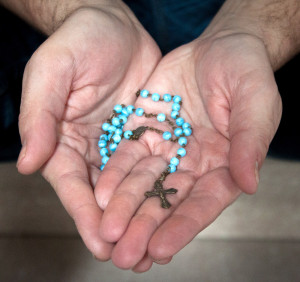 Krenz remembers opening his hand to find a blue rosary. He thought it a little strange since Iraq’s religious culture is predominantly Muslim. Though he couldn’t understand the older woman, he perceived gentleness in her demeanor. He placed the rosary in his front pocket where it remained with him for the remainder of all three of his tours.

He still carries the rosary with him to this day.

“I’m not religious, and I’m not particularly superstitious,” he said. “It’s just something I don’t feel safe without.”

For Krenz, the rosary is a reminder of the peaceful intentions some Iraqi citizens felt toward the troops, and the good fortune he’s had during his tours overseas.

The transition back to civilian life proved to be difficult at first. Though his symptoms of post-traumatic stress disorder (PTSD) were never too severe, they were still present. Noises startled him at first among other sensory stimuli.

One incident happened at Fifth Third Ballpark when fireworks were set off after the game. Though he was aware of the fireworks show, he wasn’t prepared for the physiological response his body had the moment he heard the explosions.

“The last time I heard anything of that magnitude were actual explosions in a hostile area,” he said.

With each successive boom, his heart raced and his breath quickened.

“I was still in combat mode, but I was in Grand Rapids instead of Tikrit.”

The adjustment to normal life took a while for Krenz, but it did come. In time, he found that talking about his stories helped put distance between himself and his emotions from those experiences.

“What helped me personally adapt was sharing as much as I could with as many people as I could,” he said.

Working at the Veterans Office at GRCC has given Krenz an opportunity to reach out to other veterans. Janice Holton, a benefits coordinator, says Krenz has been a tremendous help to incoming students.

“It helps a lot, because the vets trust another vet that they’re talking to,” she said. “They can relate to him more because I wasn’t a vet. It’s important to them to have that presence.” 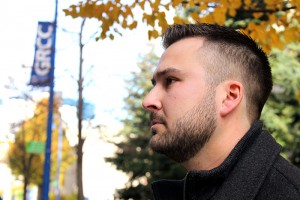 In addition to working for GRCC, Krenz is pursuing a degree in criminal justice with plans to transfer to Ferris State University. He hopes to use his training as a military police officer toward a career in law enforcement someday. Recently engaged to fiancée Rebecca Ritter, he is looking forward to an autumn wedding next year.

“I count myself among the lucky,” he said. “Rebecca is my home, and my best adventures lie ahead of me.”