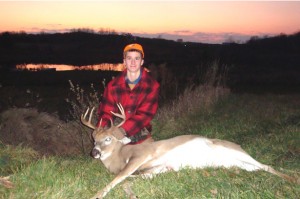 Your hands are shaking, palms are sweaty, and heart feels like it’s going to rip through your chest. As he gets closer your stomach tightens. You grip your bow, drawing it back with your dominant hand. Staring through your neon green peep sight, the rubber fletching of the arrow brushes the corner of your mouth as you aim the carbon arrow, with four blades that will do fatal damage if released right. You erase all thoughts from your mind, feeling the adrenaline coursing through your veins, you feel no pain, the tunnel vision kicks in, and everything becomes silent. Focusing on the six-point buck, you are lost in your surroundings as you stare him down. He turns broadside, you release the carbon arrow and it launches in a blur.

The sensation of getting a deer and the rush that comes with hunting is part of a lifetime adventure. I was born into it and have always had a passion for the woods and hunting, carrying on the family tradition.

It dates back to 1907. My great-grandfather, Bert Idema, started hunting as a kid and continued to do so his whole life. In 1932 my grandpa, John Idema, was born. Just like his father, he began hunting from childhood, all the way to when he was diagnosed with heart disease. This never slowed him down though; he still hunted every year, until he passed away. I remember sitting with him, amazed by his ability to sit still for hours and hours. He would joke with me saying I was swatting flies, even though I was itching my head. Eventually, the doctors told him not to hunt because he could over exert himself and have a heart attack. But despite the doctor’s advice, he hunted until he couldn’t walk anymore. He passed away in 2004.

My dad, Andrew Idema, was born in 1963, and just like his dad and his grandfather he started young and fell in love with hunting. He will always be hunting until he physically can’t anymore. My brother, Mike Idema, and I were also born into the hunting life. It seems to be embedded in our DNA, coursing through our veins. A tradition of over a hundred years.

When I was 14 years old, I went on a dry spell of getting no Michigan buck. Michigan offers a youth hunt at the end of September for kids, so my dad was right next to me in our ground blind, sitting in old office chairs.

The night was approaching rapidly and the deer were on the move. In front of me was a clover field, with a hayfield  250 yards to my right and an oat field 200 yards to my left. Right before shooting hours were about to end, a big eight point came out in the oat field.

Tapping my dad’s leg, I say I’m going to shoot him. I raise my .308 rifle my dad bought me when I was 12, and I rest the gun quietly on the window sill, placing my cheek tight against the wooden stock of the gun. I frantically peered down the scope looking for the buck.

I found him and I whispered to my dad that I was ready to take the shot. I clicked the safety off and made sure the crosshairs were behind the buck’s shoulder and pulled the trigger. The deer dropped to the ground instantly and it felt like I made history, I finally got a buck on the land that has been hunted on for over 100 years by my family; my great grandpa, grandpa, dad, brother, and now me.

My dad said he was so proud of me that day. My brother and my mom came running out of the house and all gave me high fives. It’s a moment that will last in my memory until I die. I have finally etched my name alongside other Idema’s that have gotten their deer. It’s like a feeling of relief and pure joy, that’s hard to compare it to anything else, because it is an emotion that is unlike any other.

It was my dad, playing the role of my grandpa, who showed us how to butcher a deer, how to take care of an animal properly, and how to make the most clean and humane shot possible.

Everything my dad ever learned about hunting from his dad was taught to us that year, my brother and I trying to wrap our heads around all the tricks of the trade. We had to learn how to pick a hunting stand and when to hunt it, because if the wind is not right the spot will be no good and the deer will wind (smell) you.

One of my grandpa’s favorite quotes was, “You can’t eat the antlers.” No matter how big or small the buck is you can’t eat the antlers, all that matters is putting meat in the freezer. With all the deer we have gotten over the years, we butcher them ourselves and make breakfast sausage, steaks, jerky, hamburger, and ground venison; no meat goes to waste. 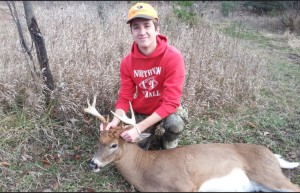 You sit in the stand 16 feet above the ground. Scanning the scenery, you hear the spring peepers, the chipmunks squeak and squirrels rustling the leaves as they bounce from tree to tree.

You’re holding on to your grandpa’s old, scratched and gouged 12-gauge pump shotgun, which he hunted with for over 50 years. You wonder how these scratches happened and the stories behind them. Now, it’s in the hands of a 16-year-old kid who is hoping to carry on Grandpa’s tradition. Your brother is holding Dad’s old 12-gauge shotgun, which was Grandpa’s, passed to Dad, and now to him.

The tradition lives on.