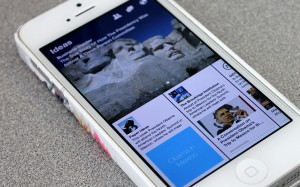 Facebook’s new app, Paper, gives you a stylized way to look at your news and your friends’ activity.

Paper lets you view your news feed in a new way, as well as post content and see recent news articles. Paper aggregates news articles based on your Facebook activity and different topics you can choose. It’s designed to be simple and fluid, using several touch gestures to get around in the app. Besides the news articles, you can also see notifications and messages via the familiar icons in the corner, and post statuses and pictures.

Unfortunately, Paper is currently only available on iOS 7. It doesn’t appear that Paper will be released to other platforms like Android or Windows Phone, but its features may be passed onto the main app if they are popular in Paper.

At first glance, this app is incredibly similar to news apps like “Flipboard” available on Android. This is the first app developed by Facebook Labs, a division of Facebook developing new products and services. Facebook reportedly kept the development team behind Paper small and focused, ensuring that the app was released without being rushed. Paper is a very clean, relatively simple app.

Paper could, theoretically, be used in place of the normal Facebook app.

“It’s all about how you use Facebook,” said Drew Rozema, an adjunct professor of mobile app development at GRCC and Director of Technology at Fox 17. “Most of us use it as a place to share the stuff we find around the web and keep up with our ‘friends.’ The way we use the service is evolving, though, for a lot of us, we’re integrating it with our email and scheduling apps to keep tabs on people, and using it less and less as a stand alone thing.”

Students had mixed responses to the app, and very few had heard of it before. Many of the people interviewed did not have iOS devices. They viewed a demonstration of the app on an iPhone before commenting.

“I think it would make using Facebook more efficient,” said Zack Beardsley, a student in his second semester at GRCC. “I probably would use it.”

Some students had similar views.

“It looks pretty cool and convenient,” said Chris Tymczyn, a visitor to the campus.

“I’d give it a try,” said Josh Fink, a returning student with an Associates in Business. “I like the setup, with the pictures and the navigation.”

As it is currently, Paper is missing some of the more advanced features of the main Facebook app and website, such as Pages and Events management. If you are a casual user however, everything you need should be there. As a news aggregator, Paper is a fully functional, but its customization is limited to picking topics you’re interested in, and whatever algorithms Facebook uses to determine your interests. Users of RSS feeds or more feature-filled apps may be disappointed.

“I prefer to choose my own news, as opposed to being spoon fed what Facebook thinks I should be interested in,” said Rozema.