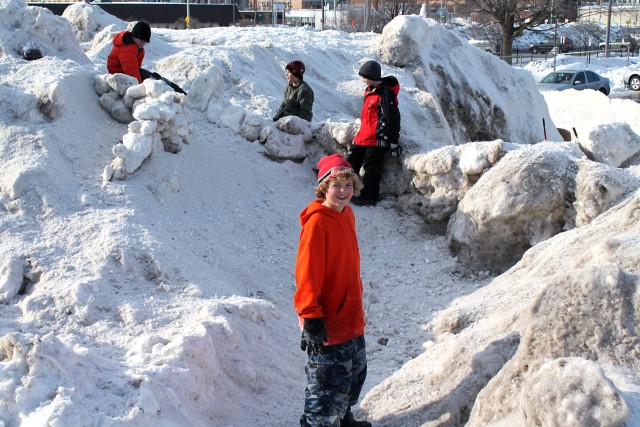 Driving through the roundabout at Wealthy and Jefferson, passing motorists may have noticed quite a bit of commotion going on in the Grand Rapids Child Discovery Center parking lot. For the past week, parents of students, neighbors, and friends worked tirelessly night and day to complete a massive snow fort.

Five years ago Rich Haralson, who lives near the school and has children there, decided he wanted to build the Guinness record for world’s biggest igloo. After a little trial and error, mostly error, they decided it was too dangerous to build above their heads. After sustaining a minor head injury, Haralson had to take some time off, because they didn’t really know what they were doing, and didn’t want anyone else to get hurt. While recuperating from his injuries he had the idea that instead of building above, they could dig. So he got back outside a week later, and started from the top down. Since there is no formal training involved, everything is learned on the fly.

“We do what makes sense,” Haralson said. “We’re making nice arches, complete arches. We’re talking one from the bottom and run it all the way to the end.”

They didn’t break the record for largest igloo, but they built an impressive fort, and threw a big party for all of their friends.

In the following years the idea has grown, and so have the proportions of the structures. As the structures grew, so did their popularity. A few years ago the Food Network was in town with the “Ice Guru Show.” Haralson received a call from the Food Network, asking if he would do something for the show. Using 900,000 lbs. of snow, and a little help from his friends and their snow blowers, he constructed his most ambitious project yet, a massive structure complete with ice castles, slides, even a frozen bowling alley.

This year, Haralson decided to go all out. He was asked by Erin Melcher, the Child Discovery Center’s principal, to build his fort out of the giant snow pile built up in her school’s parking lot. Haralson waited for the right time, and in the snow fort business timing is everything. Rain is a real enemy.

“We were waiting for the weeks to line up, with the weather,” Haralson said. “The rain kills it quick. You put all that effort into it, and it dissolves. So we shortened it to six-day builds. You start on Monday and just charge through.”

When the weather was just right he and his crew of “Rockstars” (Haralson’s term for people who get things done, or Do-ers as his friend Ben calls them) got to work. Working tirelessly for six days and nights, they accomplished their goal.

On Saturday, Haralson gathered all of his friends, neighbors, and anyone else who heard about it through the grapevine for a huge party. Aside from bringing the community together Haralson’s only goal was to show his friends a good time, and according to him it went well. “It went great,” he said. “It far exceeded expectations. I can’t wait for next year.”

Next year Haralson has big plans. The ultimate goal is to have a community wide event, “Dare I say, something like Snowprize?” Haralson said, alluding to that other famous, annual Grand Rapids event. While it’s still in the infant stage, he thinks it could work. Getting people interested is the hard part, because with the weather around here, finding giant piles of snow is easy. “There’s snow everywhere, so it’s a free medium,” he says. For Haralson all his hard work and money spent is worth it, as long as it brings the community together. “It’s pure community. That’s what it’s all about”