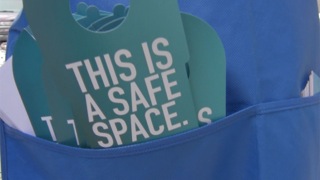 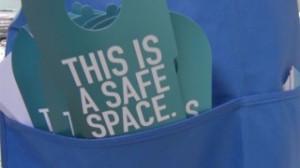 Awkward glances and shy giggles pervaded the air on Thursday as Planned Parenthood volunteers passed out bright blue condoms to students around campus.

The event, known as a “condom drop,” kicked off the start of National Condom Week. Its purpose is to encourage people to practice safe sex.

For students greeted with the condom sample, the experience was a bit odd if not awkward.

“I’ve never had that happen before,” said Grand Rapids Community College student Dan Ophoff, while two girls close by nodded. “I can understand what they were going for, though,” he added.

Volunteer Rachel Aponte stressed the importance of safer sex options. “As much as people would like to believe that teens and young people aren’t having sex, it does happen,” Aponte said, “And it’s good to know that people are practicing safe sex to prevent STDs and pregnancy.”

Although the 16 to 24-year-old age demographic only makes up one-fourth of the nation’s sexually active population, they account for nearly half of all new STI cases each year.

As for the condom drops around Grand Rapids colleges and universities, “There will be more in the future,” assured event coordinator and volunteer Devin Lagasse.