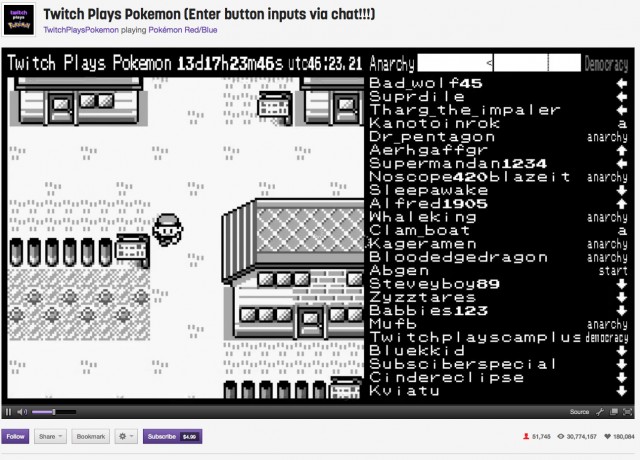 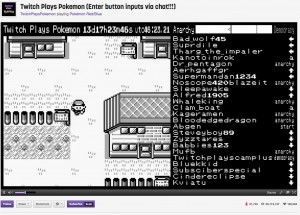 Twitch Plays Pokemon brings back childhood memories of game play. This rising online game is also a social experiment. Launched Just over a week ago, it’s estimated that hundreds of thousands from all over the world are playing the same game at one time.

This is made possible by “twitch.tv”, which is a website that enables live streaming of video games. Twitch Plays Pokemon is fed through Justin.tv, a Twitch live streaming website.

“(Twitch.tv) gives individuals a way to stream content live to the internet, whether it is from their webcams, mobile phones or wired in from a TV,” said Matthew Lyley in an online article.

It’s a simple concept; just type your moves into chat. Moves could be up, down, right, or left. The move with the majority of inputs wins outs. The fact that many are playing a single game at once makes it chaotic. Often this results in a lot of walking around in circles as players enter conflicting moves. Somehow, despite all of the obstacles, the game moves on.

I assume some players are picking up where they left off as a kid playing Pokemon. Honesty, I was more interested in Barbie and Polly Pocket as a child. However, today I find the concept, rather than the “play” more interesting. Imagine hundreds of thousands of people working together simultaneously to accomplish something like playing Pokemon. That’s what makes this a social experiment. It makes one wonder what else could be accomplished?

Perhaps the high traffic for Twitch Plays Pokemon is in part due to the level playing field. The creator doesn’t elicit special privileges to those who subscribe. All players have an equal chance of having their input played if it is in the majority of inputs.

“I think it’s best if everyone has the same capacity of input,” said the game creator, an anonymous Australian, on the website twitch.tv

Whether the fair treatment the creator gives or just plain buzz, the game continues in popularity. To watch or subscribe to this up and coming game head to twitch.tv/twitchplayspokemon.com.