Grand Rapids Community College is producing its first musical in 20 years this spring, and the show opens tonight.

“The Hatpin,” will be showing at Spectrum Theater May 15 through 17. Rob Karel and former GRCC music professor Duane Davis will direct the show together. 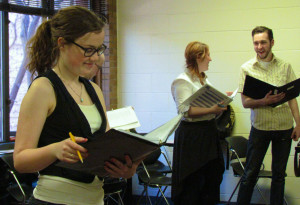 It is being produced as a collaboration between GRCC’s Theater and Music departments.

The show, written by Peter Rutherford and James Miller, is based on a true story that happened in Redfern, Australia in 1892. It tells the story of a single mother, Amber Murray (played by Meeka Postman), who advertised for someone to take care of her baby in the local newspaper, as she could no longer care of him.

Charles, played by Robbie Ellis, and Agatha Makin, played by Mackenzie Moira, respond to the ad and offer to take in the child in so Amber can get back on her feet. They do this under the circumstances that they must receive regular payments from her. Amber returns to the Makins on a regular basis to visit her son, but is frustrated when they never allow her see him. This makes her wonder what has actually become of him.

The GRCC version of the show is done with a small cast who fill many different roles in the show.

Postman, a theater major at GRCC, said she feels there are many themes that can come out of this show.

“The story is about Amber’s struggle to take care of her son and provide for him,” Postman said. “The thing I really love about the story is the underlying message of hope. You need to speak justice and be strong for those who cannot. You need to take that to heart even if terrible things happen to you.”

“Charles is very exaggerated,” said Ellis, a musical theater major at GRCC. “He kills people, lies, and then lies again. I am used to playing the cartoony characters, such as the hero of the story. This is a stretch for me. I am not used to playing the person who the audience hates.”

Ellis explained that he was very surprised when he learned the musical was based on a true story.

“It is one of these stories that you cannot believe people actually do not know really happened.”

Ellis said he has enjoyed his time working with the cast and crew, especially Duane Davis, the music director.

“Duane will chuck you like a football to where you never thought you would be before as a singer.” Ellis said.

“What is fun about playing a character who is actually real is that you can find out about their life…for my character, she does not want to struggle in life,” Moira said. “She wants a good life, and she is not afraid to do anything she has to do to be happy…It’s fun to play the highs and lows of a real character, and then try to find out what their motivation is behind their actions.”

Karel said he personally came across the show and brought it to GRCC’s attention as a possibility for this season.

“There is something truly beautiful and haunting about this show…” he said. “Audiences should come out to see that a musical can be more than just happy songs and dances with a basic boy meets girl plot line. This show is a beautifully tragic story that is a part of history most of us in America don’t even realize happened…the themes and emotions are universal.”

“The Hatpin” runs at 8 p.m May 15 through 17 at GRCC’s Spectrum Theater. Tickets run at $3 for GRCC students with student ID, $5 for GRCC employees and other area students, and $10 for all other tickets. They can be purchased at the box office, or by calling 234-3946.