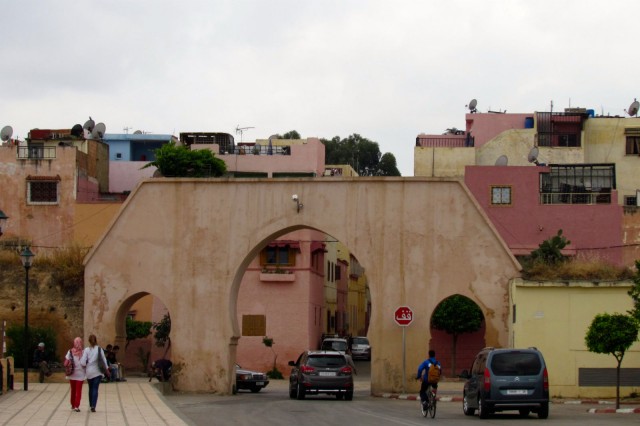 At breakfast the first morning in Morocco, I discovered the Moroccan breakfast crêpe that I would be eating nearly every morning of my trip.

The msemmen Moroccan crêpes are very flat, and look like pieces of grilled bread. After coming back from the trip, this is one of the foods that I miss the most, and have had the hardest time figuring out how to recreate.

Another common breakfast food that we ate nearly every morning nicknamed by our group as the “pancakes with a thousand holes,” or the baghrir Moroccan crêpe.

Crêpes are usually eaten with jam and honey, and accompanied by green or mint tea.

Scroll to the bottom of this post for the baghrir recipe. While the recreation does taste quite similar to what I had there, nothing can truly replace what exactly we were served.

On the drive we took to Volubilis that day, which is known as the crown jewel of Morocco’s Roman Ruins, I began to absorb one of the most shocking differences between the United States and Morocco.

I was very surprised by the amount of trash that covered the side of the road and courtyards of homes and businesses there. Many times throughout the course of the trip, I noticed locals just dropping trash wherever they pleased.

While we were walking around Volubilis that day, our professor noted that she could smell the olives on the trees around us. Prior to traveling to Morocco, I did not know what fresh olives still on the tree smelled like. The only way that I could describe the scent is a very olive oily scent, but in a way it smelled like rum was mixed with the olive oil.

Baghrir is a Moroccan crêpe, and is traditionally made out of semolina or white flour. The small holes on the surface of Baghrir give it a unique look, and allow it to soak up honey, jam, or anything you prefer to spread on it. Moroccans eat it at breakfast, or for evening snacks along with tea.

In a bowl put the dry ingredients and add water gradually. Mix well. Put the mixture in a blender and mix for five minutes.

The batter shouldn’t be very thick.

In a warm place, let the batter rest for 20 minutes or until there are bubbles on the surface.

Pour enough batter to cover fully the surface of the pan. Place the pan on medium heat.

On medium heat, cook crepe until you notice there are plenty holes on the surface.

Serve it with some honey and butter, or jam.

Adapted from the recipe featured at: http://bit.ly/1nhPIGT