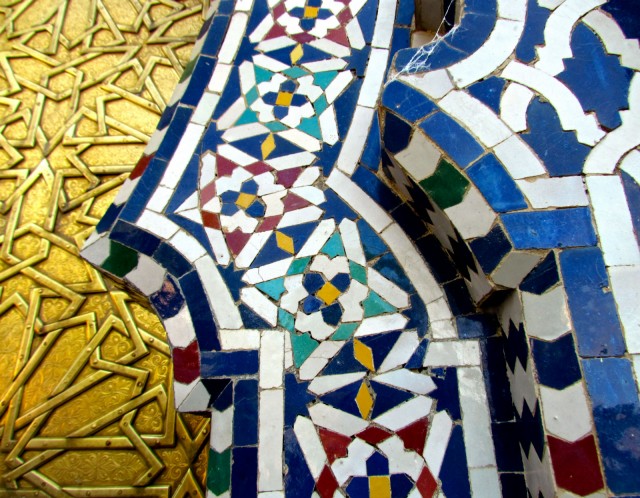 The day in Fes was spent in a medina, or the walled in market.

While we went into pottery, a scarf and fabric, and a leather co-op and were treated like royalty by the people who worked there, as I quickly discovered, they did not have very charmed lives. This was one of the largest culture shock moments that I went through on the trip.

Throughout the day, and multiple other times throughout the trip, children approached members of our group. They attempted to get us to purchase a package of tissues from them. This happened several times, and I would respond by passing out mint candy to the children who were begging.

The pottery co-op was one of my favorite parts of the trip. It was not the making of the pottery that fascinated me, but the making of the mosaics that had me so interested in this place. All over Morocco we saw all these doorways that had mosaics around them. Prior to coming to the pottery co-op, I would have never really understood that they had to be made by one person breaking each tile so it fit perfectly together. It looked like such a long, and possibly a very tiresome project.

We then walked down to the part of the co-op where we could purchase anything and everything that was leather. They had shoes, different styles of handbags, and of course, jackets.

I examined a leather jacket that I was interested in purchasing, but they did not have the color and style that I wanted together. The man at the co-op who had been helping me said it was “no problem.” They made me a brand new coat in two hours, and then delivered it personally to my hotel. That was some of the best hospitality I had ever experienced in any store.

While we walked through the medina that day, for whatever reason I began to feel sick, and my equilibrium felt as if it were off. Whenever anyone from one of the co-ops asked me why I was not shopping like the rest of our group, I would just mention that I felt sick at the moment. They would immediately offer me a place to sit down, and some mint tea if I wanted it.

The Moroccan hospitality, as I quickly learned during my trip, was quite wonderful towards tourists.