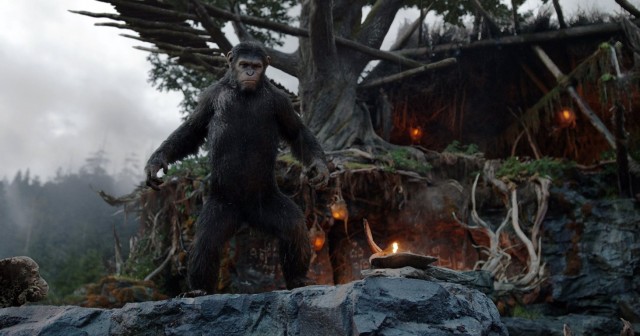 After watching “Dawn of the Planet of the Apes”, I walked out of the movie theater realizing that the summer blockbuster I watched was not like most other blockbusters. There wasn’t any non-stop explosions, no wise-cracking killer robots, no one-dimensional macho bro male lead and scantily clad love interest, no corporate product placement, and no paper thin plot. Instead, I walked out of a movie that was not only the best “Planet of the Apes” film I’ve seen, but was the best film I’ve seen this year.

Spoilers ahead, you’ve been warned…

If you’ve seen the first film of the rebooted “Planet of the Apes” series (2011’s “Rise of the Planet of the Apes”), the second film starts right off in a montage of the destruction caused by the “Simian Flu”, a virus created in a laboratory that experimented on apes. News reports of hundreds of millions dead, mass riots, nuclear arsenals being detonated, shaky footage of apes walking the streets and audio diaries of survivors saying one last goodbye to their love ones. While humans that are genetically immune to the virus have held up in shanty strongholds, apes have taken to the vast wilderness and created a tribal city in the redwoods. Most humans think the apes are just mindless animals living far away, most apes think all of humanity has wiped itself out.

The leader of the apes is the chimpanzee Caesar, played by Andy Serkis, the main protagonist from the first film. Caesar is the most compelling character in the film; not only is the CGI rendering of the ape amazing, but his character is fully three-dimensional with strong emotional depth. Caesar is counselled by two other apes with opposite viewpoints; the orangutan Maurice who is the peaceful shaman/teacher of the tribe, and the bonobo Koba; the scarred militarist whose hatred of humanity caused by a life of scientific torture (by the same people who created the Simian Flu) has driven him mad. Caesar is able to keep the tribe united and at peace until a patrolling unit of apes comes across a patrolling unit of humans.

Malcolm, played by Jason Clarke, is a peaceful human trying to get a nearby hydroelectric dam functioning to supply the human settlement (in nearbySan Francisco) with power. He doesn’t want a war with the apes, he only wants to survive and live in peace. As you can imagine, if the apes can have opposing factions, so can the humans. Dreyfus, played by Gary Oldman, is the leader of the human settlement and an ardent militarist. He wants to regain power so that humanity can not just survive, but retake the world from the apes.

This is what the complex story really boils down to; the coexistence of different tribes. While there is certain distrust between apes and humans, Caesar and Malcolm see the similarities that unites their people and ultimately begin to learn from each other. This is thrown into chaos by the militarists Koba and Dreyfus, who view the opposing species asbarbarians that must be cleansed from the planet. All out destruction caused by the rise of tensions draws similar comparisons to modern day religious and ethnic conflicts, like Israel and Palestine, Northern Ireland, and Iraq.

Although it is dark and shows us a cynical side of tribal conflict, it also very touching. Seeing a CGI ape hold his child in his arms, contemplating the dangers of the world, is remarkably compelling and relatable. This is one of the best blockbusters I’ve seen, and I highly suggest seeing this captivating movie.