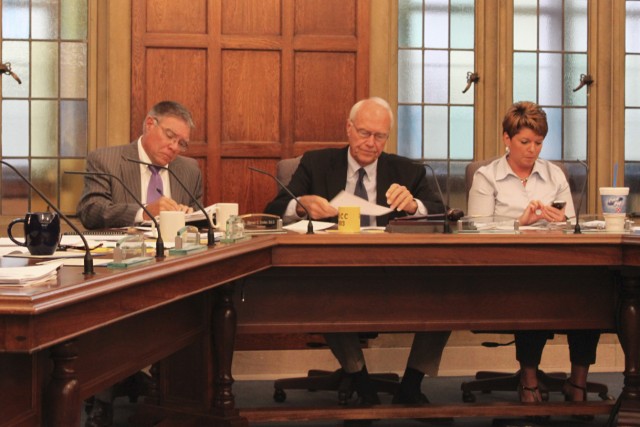 Lisa Freiburger, Vice President of Finance and Administration, updated the board on the low enrollment numbers at the college. When preparing the budget for the 2014-15 year, the finance department anticipated billing units (number of credits students are in enrolled in) to be down around two percent. As of today that number is 7.6 percent.

This translates to close to a $2 million gross revenue loss, with an annual impact to the operation budget, for the entire year, of almost $1 million, Freiburger said.

She reassured the board she expects that no money will be drawn from the reserve fund, but instead the deficit will work itself out.

“The difference between those two numbers ($1 million and $2 million) is … the section reduction that our academic team does to manage enrollment and student requests for classes,” Freiburger said. “As enrollment numbers come in less than we had planned, our academic team looks at section offerings and section need, based on student demand and reduces those sections until they are appropriate. That does help to reduce our bottom line.”

The workforce statistics report reflects the college’s progress toward equal employment for everyone and contained five years worth of data, from fall 2009 to fall 2013.

She told board members that minorities made up 20.6 percent of the workforce.

The 2011-14 GRCC strategic plan was to hire a full-time workforce that reflected within 5 percent the demographics of the student population they serve. The student minority population had risen from 23.9 percent in 2009, to 24.5 by fall 2013. Compared to other two-year public colleges GRCC exceeds the average of 15.5 percent.