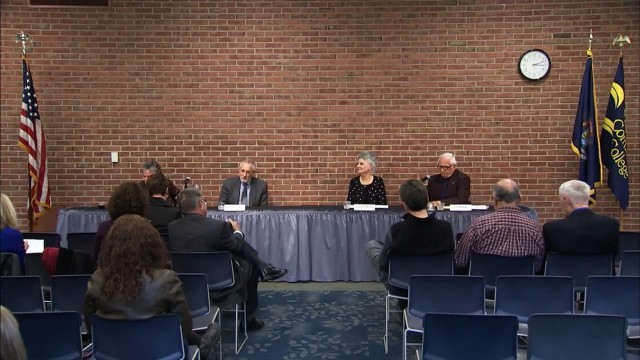 Grand Rapids Community College hosted a Board of Trustees candidates forum Oct. 21 to introduce the candidates to faculty and staff.

The discussion started but then spiraled into debate between the audience and Harvey. The mood shifted when questions arose about Harvey’s book that “deals with issues such as homosexuality, abortion, gambling, adultery, criminal justice, evolution, (and) national debt,” from a Christian perspective according to the Barnes and Noble website.

Keith St. Clair, Professor of Social Sciences, raised questions on Harvey’s book, and explained the his takeaway from the book was that Harvey believes that “liberal professors in the United States and higher education are undermining American values”.

In response Harvey attempted to explain his book and his views on liberals.

“It’s satirical and it reflects one particular position,” Harvey said. “I, in no way, believe that liberals or liberal faculty are trying to undermine a college or country. They have a position. I would be concerned if that was the only position that was heard. I think all positions need to be heard.”

On page 18 of Harvey’s book, he writes, “Also, keep Blacks from considering that, if it wasn’t for slavery, they (African-Americans) would not be citizens of the most prosperous society the world has ever known. They would likely still be in Africa living in an undeveloped third world country wishing they could get into the U.S.A.”

In an effort to explain this at the forum, Harvey said, “I have a right to opinions on the slavery thing. That book represents a worldview that I hold. I have a right to hold it as you do yours…I simply express some of the opinions that I have in a satirical way to stimulate discussion and thought … That’s academic freedom. If I were a professor on this campus and I had written that book it seems to me you should respect that.”

Harvey seemed confused as to why the question was raised at all.

Williams redirected her question back to her initial concern of Harvey’s views conflicting with the students themselves and his potential representation of GRCC’s values to the college and the community as a Trustee.

Harvey said he was for inclusivity and academic freedom.

“I happen to believe that the worldview I hold has been discriminated against in higher education in some places,” Harvey said. “Eighty percent of the faculty members in public universities in this country are liberal or voted for Obama. Now that seems to me to give a liberal tint to academic freedom in this country. Conservatives are not represented equally on college campuses. In fact, some are discriminated against.”

The room was tense with concern over Harvey’s views.

“The worldview that I represent is a minority on the campuses,” Harvey said firmly. “I would like to have it treated warmly, friendly, and equally with yours.”

Bristol then grabbed the microphone from Harvey and quickly separated herself from Harvey’s statements.

“Jim and I do not agree on everything,” Bristol said. “I just said a few minutes ago that I heartily endorse diversity. I have seen it in the classroom, I enjoy it. I learn from diversity. I had students of different backgrounds and the discussions, the content they brought to the classroom discussion was enriching and so I highly support diversity.”

Bailey commented shortly after and said one of her goals as a trustee is to ensure inclusivity in the college with no exceptions.

“My passion isn’t about embracing diversity,” Bailey said. “It’s about making inclusive environments in institutions and doing everything I can in my power to make sure that each and every person regardless (of) conservative, liberal, race, gender, ethnicity, diversity of thought, has the same access that I’ve had.”

The next GRCC faculty member to speak was Penni Weninger, Support Professional of Human Resources. Weninger brought up the fact that Harvey’s Facebook page is sponsored by Right to Life of Michigan and Citizens for Traditional Values and asks supporters to “please uphold our candidates in prayer” and presented her concerns that his religion may overlap with his role as a trustee and the usage of religion and “heavily one-sided political values” as a campaign tool.

Harvey responded by questioning Weninger, asking if she was saying that “no christian can serve on this board because they have a worldview” and asked if she believed in prayer.

Weninger replied “no” to Harvey’s questions.

Frank Connor, of the Psychology Department, then asked about academic freedom within subject matter.

Connor referred to the subject of evolution and how, while students may disagree with what’s being taught, they still have to answer questions on the grounds of Psychology, and asks the candidates how to handle student disagreements around that structure.

“It can’t simply be an open debate…that’s not how college works,” Connor said.

Harvey seemed to contradict himself in his response and avoid the question.

“There’s a disturbing fact and that is that information and science tend to point the way to truth,” Harvey said. “And I think we need to rely on facts and information.”

Paskewicz explained how the Board of Trustees would respond to Connor’s situation. He said that the job of the Board would be to make sure the President is enforcing the limitations policies, and if he is not, then the Board may intervene as a group.

“But for the board to, say, individually to step into the means of the operation, I think is stepping out of our role as a trustee,” Paskewicz said.

Despite the intense focus on Harvey’s book and worldviews, the candidates did explain what they would do if elected.

Bailey said GRCC’s open admissions opportunities are a unique asset when compared to other colleges, as well as the workforce development programs, and the efforts made towards student success.

Paskewicz refers to his experience working as superintendent for Northview public schools and his training under the Carver model for policy governance.

“I have never been held so accountable, yet so free to do my job, as when a board uses policy governance correctly,” Paskewicz said.

On the topic of millages, Bristol said it is wise to live within means and not spend more than what is already there. Harvey also said that the college should reach out to the already established sources such as lobbying the federal government and industries that GRCC provides workers for, and seniors in the surrounding area who may be willing to pay more towards the college.

Paskewicz, when questioned on what the academic freedom of faculty should be, said that it is damaging to restrict to the point of limiting access and that the board of education should think together rather than think alike.

Election Day is Nov. 4. All four candidates will run as individuals on the ballot without party affiliation.