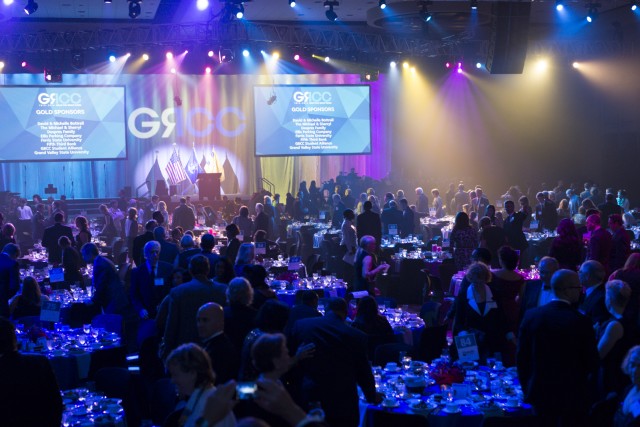 After a poem written and read by Azizi Jasper, and the national anthem sung by Mark Jackson, both graduates of GRCC, Judge Sara Smolenski, another GRCC alum and the Mistress of Ceremonies, kept the audience laughing as she introduced speakers throughout the evening.

“I would not be here right now, tonight, if it wasn’t for Grand Rapids Community College,” Smolenski said. “(My) parents met at Grand Rapids Junior College in 1936.”

“Community college changed my life,” Snyder said. “I would not be standing here today if it were not for community college … when I was 14 years old, I got that catalogue that comes in the mail, and I found the little box that said you can start taking community college classes before you got out of high school.”

Snyder went on to explain that his mother eventually paid for him to take an Intro to Business Class, as well as several other classes to follow while he was in high school.

Hank Meijer, CEO of Meijer, introduced President Ender after highlighting the reasons that the Meijer corporation has been a major supporter of GRCC over the years.

“At Meijer, we feel a real kinship with community college,” Meijer said. “(The) relationship with us, and so many employers in Grand Rapids is really close, and really important. If you think about it, we strive to do what community college does so well, and that is be in the opportunity business.”

Meijer then introduced president Ender. Ender’s keynote address was accompanied by a series of videos produced by Klass Kwant and the media department. The focus of the videos was current and former students with a GRCC connection. Ender saved the moment that everyone was waiting for until the very end, the announcement of total money raised for new student scholarships, in relation to the gala.

“Did we raise that million dollars?” Ender asked the crowd. “As of Thursday, of last week, we confirmed that this event had raised $1.3 million dollars.”

At the end of the night Don MacKenzie, Associate Vice President of College Advancement and Executive Director of the GRCC Foundation, clarified that the $1.3 million raised included the cost of the event.

“We know that we cleared $1.1 million for new student scholarships,” MacKenzie said. “We know we’re going to create an endowed fund with it. We’re just waiting for a conversation to take place, between president Ender and the board, before we make a final (decision) on how those dollars will be used. Those dollars will be endowed and restricted for scholarships.”

According to MacKenzie, all of the money will be put in the bank and only the interest will be spent on scholarships over the years. Around five percent is expected to go to scholarships each year.

After the event, as the crowd filed out, faculty, staff and students seemed very pleased with the way the night turned out. There were a variety of reasons why each attendee enjoyed the night.

“I just think the event kind of capitalized this institution,” Ender said. “It was a phenomenal event, … I was stunned with the turnout. We raised a lot of money for scholarships, so I am very pleased.”

French professor, Hillary Haney and Spanish professor, Carmela Zapata attended the event together and both agreed on their favorite part of the night, Judge Smolenski’s performance as Mistress of Ceremonies.

“I think she’s very animated and she’s very passionate about the fact that community colleges make a big difference in the community,” Zapata said.

“The event was fabulous, and we are very grateful to all of our supporters,” Freiburger said. “The dollars that were raised for scholarships, for students, it was wonderful.”

GRCC Campus Police Chief Rebecca Whitman enjoyed the fact that the gala pulled in such a large number of people.

“It was a great event, and great to see the support of the number of people who showed up,” Whitman said.

Student Alliance members were among the few current GRCC students who had the opportunity to attend the event, besides members of the music program and culinary institute.

“I think it was a wonderful evening,” said Joshua Vissers, Communications Director for Student Alliance. “I was really happy to see the governor show up and the mayor being here … Exceeding the goal for fundrasing is really great. I’m looking forward to seeing … some extra scholarships for student’s futures.”