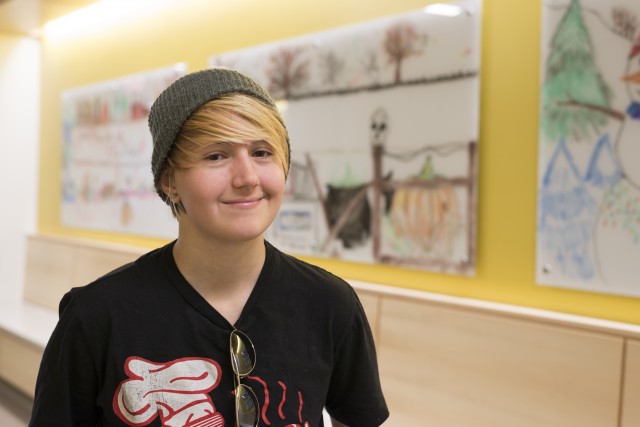 People may have noticed six whiteboards lining the south hallway of the second floor of Grand Rapids Community College’s Cook Hall. The floor, which houses the Business Lab, was part of the summer renovation. There were no plans for the whiteboards initially, but one artistic student has taken full advantage of the large public canvas as a way to express herself.

Katie Winstrom, 20, of Kentwood, has always been artistic. Whether it was a way to deal with the pressures of life or a cure for boredom, some kind of artistic medium provided the outlet necessary for dealing with what life threw her way.

“Growing up, I just always ended up doing something artistic,” Winstrom said. “Whether it was going through can after can of Play Doh … (or) poetry and writing … it just came naturally to me.”

After a gap year spent soul searching, listening to music and “playing a lot of video games,” Winstrom enrolled at GRCC for the first time this fall. While a career in art would seem like the logical goal for someone like her, she decided that psychology would make getting through school more likely. Early on this semester, she made her choice.

“I weighed my options and decided I didn’t have a very good chance,” Winstrom said. “To get a degree, then a job, you have to be very lucky. I’m not that lucky and didn’t want to bank on a shot in the dark.”

Just because she chose not to major in art does not mean that she has left it behind. She also plans on incorporating art therapy into her practice as a professional psychologist.

Every week, she will select a new quote that she finds inspiring for the “quote of the week” board, but it is really up to Winstrom to decide when and what to draw on the others.

While her latest project is holiday themed, Winstrom plans on starting a new project on the second floor whiteboards very soon.

“It’s going to be tough to get rid of the Halloween stuff,” Winstrom said, referring to her favorite work on display. “But I need to get started on something new soon.”

Defunding the Police: What Would it Mean For Grand Rapids?

From Flint to Grand Rapids And Back Again: GRCC’s Director of the Police and Corrections Training Academies Is Going Home

The pandemic isn’t over, but art fans are returning to Grand...