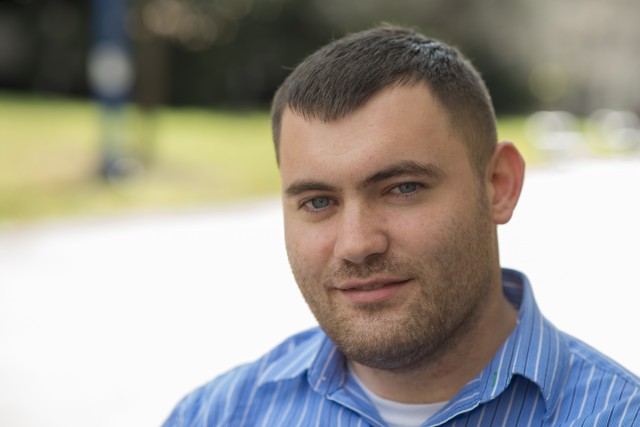 Right after he returned from his deployment in Afghanistan, Aaron Settlemyre, 27, of Holland started classes at Grand Rapids Community College.

“The transition at first was a little difficult,” Settlemyre  said. “But to the  college environment, the fast paced environment was easy to transition to from the military.”

He said his main focus while deployed was to reduce building interference on the battlefield.

“We wanted to reduce civilian causalities, and the way we did that was through working with a lot of Afghan government officials as well as village elders,” Settlemyre said. “We did a lot of work through the Department of Defense and U.S. aid, as well as assisting in training Afghan army and Afghan police.”

Settlemyre said the best part of his experience was learning how to break language barriers.

“By working with the locals in the Afghan populous, it was different seeing how a different culture works, how they function and operate,” Settlemyre said. “It is a little easier for me now to be culturally understanding with different cultures. I am a little bit better with working around language barriers…by the time I left I could hold a conversation with a 5-year-old, but I always had an interpreter with me for the most part. I mostly communicated with children on my own.”

Settlemyre’s long-term goal is to transfer to Grand Valley State University to pursue his CPA in accounting, as well as continue to work with veterans. Settlemyre currently works in GRCC’s Veteran’s Benefits office as a student assistant.

“I am transitioning out of the military, so this is a great opportunity for me to continue to work with troops and family members of veterans and help them in any way I can to make their transition to a new school better,” Settlemyre said.

“It’s a tough transition, when you are in the military you are used to being told what to do, and when to do it,” GRCC’s Veteran’s Benefits Coordinator, Janice Holton said. “Then that transition into civilian life can be very difficult, because now you figure out what you are going to do. No one is telling you what to do. Now add college on top of that, it makes it even harder. So it is a struggle that we all at some point try to help them with.”

GRCC currently has 250 veterans on campus this semester, and was recently awarded the Military Friendly Schools designation from Victory Media.

The award lists the top 20 percent of colleges, universities and trade schools in the country that are doing the best to make veterans, members of the service and their family members feel welcome on campus. GRCC has been on the list of Military Friendly Schools since 2009.

“I am very pleased we are having this event honoring our student veterans,” Ender said. “I certainly do hope it is a yearly event. Sometimes we forget how much others have sacrificed for us, and this is just a great way for this institution to formally and publicly pay tribute to those who have served our country.”

Holton, who helps coordinate veteran’s education benefits, organized the event that she also hopes will become an annual affair at GRCC.

“We wanted to put it in conjunction with our 100 year anniversary, so we wanted to do something special this year,” Holton said. “I just think it is important that we all recognize veterans. Not just at our school, but across the country. So many have given their lives for us…to keep our freedoms for us, and it is such a special group of people… it is important that we honor them.”

A tree-lighting ceremony and planting of 100 American flags to mark the first ever Veteran’s Day celebration today. The event will take place at 10:30 a.m. on the Dr. Juan Olivarez Plaza.

There will be a moment of silence at 11 a.m.

The ceremony should last around 30 minutes, and will feature GRCC President Steven Ender as the guest speaker. A student veteran will be reading a poem titled, “I am a Veteran,” and there will be two honored guests. One is a sergeant that is presently serving in the army and another currently serving in the coastguard.

An open house will follow the event, and will run through 1 p.m.

Raiders women’s basketball wins a close one on the road to...

Raiders get a much-needed win as Daye stays hot