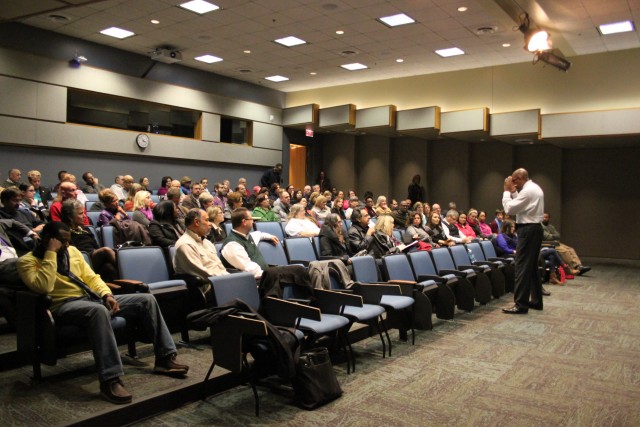 Pink started his presentation today by making some general predictions for community colleges. He then discussed how he would go about directing a school through the changing industries that students are to work in. Among his predictions, he said that he believed industries will demand more from training sources and certificates in applied science degrees will gain a greater importance.

Pink said that he thought he would be a good fit for GRCC because of how similar the job of the provost is to his current position at OSU.

“Those similarities are not just (in) the title of the jobs,” Pink said. “It also deals with what we do for faculty, what we do for students, as well as administration…our focus is what is best for students. That’s what it’s got to be, from a provost’s standpoint.”

Pink said that while he was touring GRCC he was impressed with the amount of student work spaces.

Patti Trepkowski, interim provost said she has been impressed with all three candidates who have presented this last week.

“I think they did a good job,” Trepkowski said. “It’s going to be a hard decision…for President Ender. I’m glad that we have three good choices. I’ve enjoyed doing it on an interim basis but I’ll be glad to go back to my regular job too…(I’m) anxious to see how it all turns out.”

President Steven Ender said he plans to select GRCC’s provost sometime in the next week.

To view the forum for Pink, visit GRCCtv’s YouTube link.