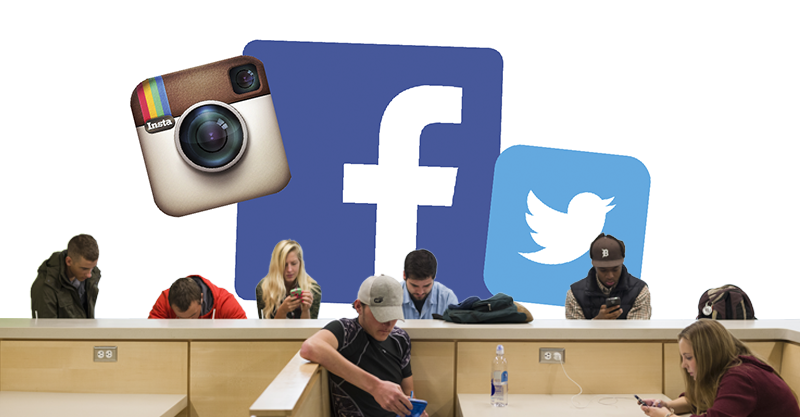 Social networks began as a way for people to connect with others quickly and conveniently. Not only is communicating easy through the Internet, but it helps people stay in touch with friends or family members who do not live close.

“Through Facebook I’ve especially enjoyed reconnecting with my cousins and their families,” said Jacquelyn Lee, Grand Rapids Community College Technology and Humanities Professor. “Without Facebook, I don’t believe this would have happened.”

Social media is also a good way to meet new people. The suggested friends option on most social media websites including Twitter, Facebook and LinkedIn, makes it easy to connect with people who share mutual friends and interests.

Shortly after the debut of social networking, businesses started seeing the potential for marketing and advertising innovations. When most of us use technology we don’t realize it, but the first thing we do is open up some sort of media.

There are a number of creative techniques used for advertising, bringing a lot of value to businesses. A large number of brands like SpaceX or Starbucks have begun shifting towards social marketing due to the large audience and cost efficiency.

Social media has been an effective tool for users creating groups for online yard sales. Users advertise their unwanted items through pictures in hopes of interested customers. There are often posts of free items as well.

This can be effective in helping families in need. Local people who regulate posts and memberships run the pages. This phenomenon is growing and lots of larger cities now have them.

Social media’s impact on our daily lives has also affected national politics. The immense audience engaged in social media makes it more efficient to politically participate. For example, President Obama’s campaign in 2008 was focused heavily on the outreach through social media.

According to Comscore, Analytics for a Digital World, about 90 percent of U.S. Internet users visit a social media site each month, making it easy to advertise a campaign.

The share button on social media websites has created an easy and effective way to pass along an important message. These messages, if shared enough, can be reached all across the world.

People take advantage of this to have a voice on certain opinions, which can be quite powerful for groups of people of related interest. The Ice Bucket Challenge was a chain of support to promote awareness of the disease ALS. Each individual participant filmed and posted their video to the Internet, creating a chain effect that circled the social media community.

For so long people thought that social media was the bee’s knees. There were few opposed to it because it was a refreshing new spin on technology’s abilities. After some time, issues were raised about a lack of face-to-face personal communication.

People now fear that social media has completely taken over humanity’s capability to be in a real social environment because of the time spent engaged with technology.

“One thing I ask my Humanities 245 students to do is to stop and evaluate how they want to spend their time,” said Lee. “Although social media might be considered a good use of time, I think people should stop and ask themselves what the best use of their time would be.”

Many employers these days check the profiles of potential employees to see what life they live through the eyes of social media. Job stability and employment prospects are threatened by negative involvement on social media sites.

One of the biggest concerns with social media today is cyberbullying. People are taking advantage of the fact that no one can adequately stop bullying if it’s behind a screen. There have been many suicide cases due to cyberbullying, such as Hannah Smith, who was found hanging because of excessive anonymous cyberbullying through Ask.fm.

Mobile devices are the most common instruments for harassment. Some schools have even added cyber-etiquette classes to better educate students about online courtesy.

Social media has become a good way to create new relationships with people, but it can also ruin them. Being on social media sites can expose a lot of information about a person and hurt relationships. It can be used as a way to spread rumors quickly and to many people.

“Everyone should be well informed about how to protect their privacy when using social media,” said Lee. “They should understand and carefully use privacy settings.”

Fake news can make it’s way into media website. Posts can be shared by uninformed individuals that seem legitimate but are entirely untrue. This is an example of false presentation, which can be demonstrated in profiles as well.

This is what spawned the show CatFish. People steal photos of others and use them on their profiles to portray a deceitful image of themselves to others.
“Although I don’t think it’s wrong for students to use social media,” said Lee. “I think they have to be sure they are using social media rather than social media using them.”