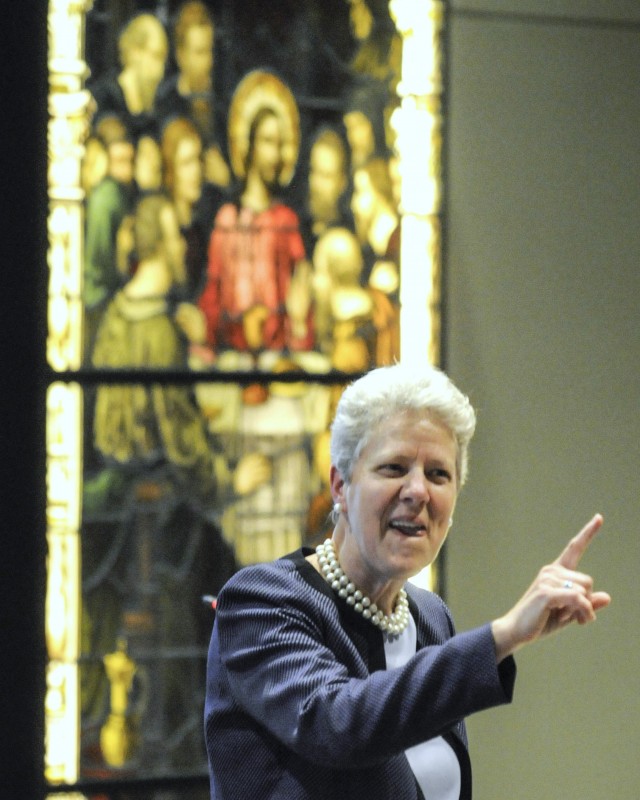 Judge Sara Smolenski kept the LaughFest crowd entertained for well over an hour at the Catholic Information Center (CIC).

The 63rd District Court judge told stories about her family, her time on the University of Michigan women’s basketball team, and her time serving on the bench as a Judge.

With the start of show delayed by 10 minutes so staff members from the CIC could bring out more chairs, a standing-room-only crowd gathered to see Smolenski entertain a crowd of more than 200, which she joked included everyone but the bishop, who was “overseeing bingo.”

Taking the stage for her first ever LaughFest, Smolenski was not worried about the crowd size. What did worry Smolenski was the fact that she was sharing the stage with Jesus Christ at the Last Supper, as she pointed to a mural of the scene hanging on the wall next to the stage.

“I promise to keep it clean,” Smolenski said to the mural, as the audience laughed

Smolenski said she “loves a microphone and a crowd,” and it showed, as she captivated the audience and could have had them laughing well into the night, if time allowed.

Calling herself “the funny judge,” Smolenski dedicated her show to Dominican sister Sue Tracy who she dubbed “the funny nun.” Smolenski was filling in for Tracy who is battling her fifth bout with cancer and was unable to perform. Tracy was the only comic to perform on stage at the CIC LaughFest location until Smolenski filled in for her this year.