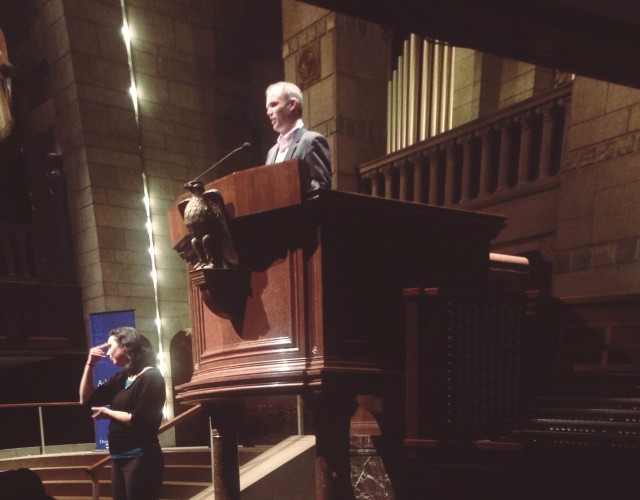 In the final 100-year celebration lecture at Fountain Street Church, Taibbi touched on topics from his 2014 book, “The Divide: American Injustice in the Age of the Wealth Gap,” in front of a nearly packed house.

Following an introduction by GRCC professor Keith St. Clair, Taibbi called attention to some of the powerful men who stood on the same stage before him.

“It’s an incredible honor and frankly a little bit intimidating to stand on this spot, where people like Malcolm X and Clarence Darrow, who were my childhood heroes … stood,” Taibbi said. “That’s a little bit scary but it’s a tremendous honor. I’m very glad and very grateful to have been brought here today.”

Taibbi went on to mention that he felt “imbued with power,” not just because of the history, but the architecture inside the building as well.

“This is by far the coolest podium that I’ve ever spoken from in my entire life,” Taibbi said. “So thank you for that. This is a beautiful facility.”

After getting a little humor out of his system, Taibbi described the path that led him to his current role as a voice for the everyman, calling to attention the fact that common street criminals are being sentenced to ridiculous prison sentences, while white-collar criminals are getting by simple slaps on the wrists. It all started with an assignment to find out the causes of the 2008 financial crisis.

“I had already tried to start investigating the causes myself, (but) I was really at square one,” Taibbi said. “I was getting nowhere … A trader at one of the big banks … said, ‘Look, your problem is that you’re trying to cover this as an economic story. This is not an economic story. It’s a crime story.’”

It was then that Taibbi discovered the financial crisis was actually the result of the illegal activity of the big banks, including sub-prime mortgage scams that he likened to New York City street vendors selling fake Prada handbags. The scam involved giving anyone and everyone loans that the banks knew would default, then betting against them.

“Instead of phony Prada handbags, what they were doing was selling phony triple-A rated securities,” Taibbi said. “It really is just an exalted, exaggerated version of a common street scam. It was like a magic trick … It was cheap and plentiful and not worth very much and (the banks were) turning it into gold. It was like the Rumpelstiltskin fairy tale. At its core it was just fraud.”

Later on the real problem was brought into focus when Taibbi compared one of the biggest banks in Europe to the guys laundering money on the ‘80s television show “Miami Vice.”

“The worst case of all was the HSBC case,” Taibbi said. “Among other things, they admitted to laundering $800 million for a pair of Central and South American drug cartels, including the notorious Sinaloa drug cartel in Mexico … When they finally got caught and admitted to the biggest drug laundering case of all time, in the history of the world, the penalty was a $1.9 billion fine, which was tax deductible, which means we all paid. The only individual penalty was that some of the executives at HSBC had to partially differ their bonuses for five years.”

When this case and others like it are compared to the innumerable cases of Americans currently incarcerated from crimes committed in the 1980s, the audience started to understand Taibbi’s point that it’s bad enough that the banks are committing these atrocities, but it’s even worse that they are getting away with it.

A Q&A session, that lasted over 20 minutes, followed the nearly hour-long lecture. Audience members thanked Taibbi for speaking and asked the journalist to elaborate on certain topics, but when asked if he had a solution to the problems brought to light, he did not have a concrete answer.

“I don’t know how you fix it,” Taibbi said. “In the age of citizens united we’re farther away from a solution than we were before. The more money you have the more influence you have.

“Conversely, because we’re not prosecuting that kind of offender, they’re prosecuting defenseless people in their place. The lack of money is becoming a weakness for another kind of person. Those people are becoming victims of the justice system. They have to do something to fix this … problem, because money shouldn’t have anything to do with justice, but it does.”