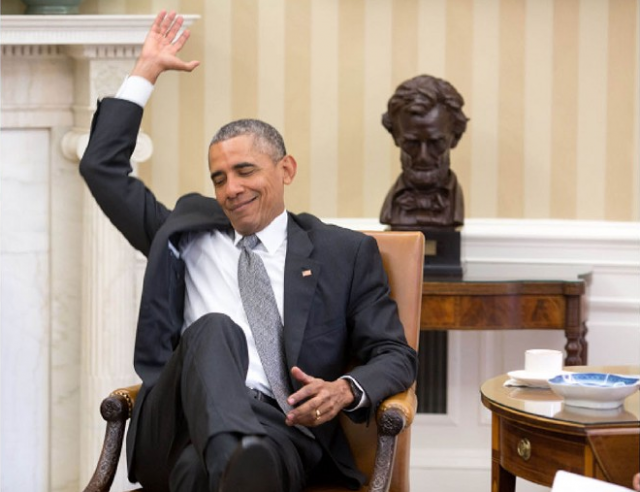 Last week saw many victories for the Obama administration including a sea change on the Confederate flag, Congress fast-tracking the Trans-Pacific Partnership, and the Supreme Court upholding Obamacare and delivering marriage equality nationwide.

The week began with Republican South Carolina Governor Nikki Haley calling for the removal of the Confederate battle flag from a memorial outside the statehouse, which can only be done by a two-thirds vote of the legislature. During the announcement, she was surrounded by not only South Carolina lawmakers of both parties including presidential candidate Sen. Lindsey Graham, who had called the flag “part of who we are” three days earlier, and Sen. Tim Scott, one of only two African-Americans currently in the Senate.

As recently as the 2014 election, Haley had claimed there was no reason to remove the flag from the statehouse grounds since “not a single CEO” had ever complained to her about it. She seemed to have been persuaded otherwise by the shooting at Emanuel African Methodist Episcopal Church in Charleston the previous week and the amazing way the families of the nine victims forgave the alleged shooter.

Though she tempered her remarks with rhetoric meant to soften the blow for flag-supporters as politically necessary for an elected official in South Carolina, she was adamant in her plea to the legislature that the flag be removed.

“(T)his is a moment in which we can say that that flag, while an integral part of our past, does not represent the future of our great state,” Haley said. “The murderer now locked up in Charleston said he hoped his actions would start a race war. We have an opportunity to show that not only was he wrong, but that just the opposite is happening.”

Haley’s actions in South Carolina seemed to reverberate across the country. Amazon, eBay and Walmart all announced plans Monday to remove Confederate flag merchandise from shelves. Alabama Governor Robert Bentley ordered the Confederate flags flying on his state’s capitol grounds to be removed without any fanfare or ceremony Tuesday morning. Mississippi House Speaker Philip Gunn also called for a redesign of its flag, the last state in the country to use the battle flag design in its state flag.

While this was not an overt goal of the president, removing what he called “a reminder of systemic oppression and racial subjugation” is clearly a win.

Wednesday was a tale of strange bedfellows. The Republican-controlled Senate voted 60-38 to give Obama the authority to “fast-track” negotiations with the other 11 countries of the Trans-Pacific Partnership. What was so unusual about this was it was mainly Democrats, including presidential candidate Bernie Sanders, who opposed this authority, in part, because of its secretive nature.

Obama has been pushing for this authority for months, despite resistance from members of his own party. Another win for the president.

Then, the Supreme Court released its 6-3 decision upholding the federal Obamacare marketplace on Thursday. The case before the court was whether “established by the state” meant the government as a whole or individual states. There are 34 states, including Michigan, that use the federal exchange to provide subsidies to citizens rather than create their own marketplaces.

“Congress passed the Affordable Care Act to improve health insurance markets, not to destroy them,” Roberts wrote in the majority opinion. “If at all possible, we must interpret the Act in a way that is consistent with the former, and avoids the latter.”

If the vote had gone the other way, approximately 6.4 million Americans would have lost their subsidies, effectively gutting Obamacare. The decision secured Obama’s health care legacy.

The Supreme Court was once again front and center in the news on Friday. In a 5-4 decision, it made same-sex marriage legal in all 50 states. This time, it was Kennedy writing the majority opinion. The last paragraph of which is quite poetic:

“No union is more profound than marriage, for it embodies the highest ideals of love, fidelity, devotion, sacrifice, and family. In forming a marital union, two people become something greater than once they were. As some of the petitioners in these cases demonstrate, marriage embodies a love that may endure even past death. It would misunderstand these men and women to say they disrespect the idea of marriage. Their plea is that they do respect it, respect it so deeply that they seek to find its fulfillment for themselves. Their hope is not to be condemned to live in loneliness, excluded from one of civilization’s oldest institutions. They ask for equal dignity in the eyes of the law. The Constitution grants them that right.”

As recently as 2012, Obama officially held the position that marriage is defined as being between a man and a woman. That changed when Vice President Joe Biden let slip that he was in favor of same-sex marriage. The president announced shortly afterwards that his opinion on the matter had evolved and that he was now in favor as well. This evolution coincided with the electorate’s, particularly amongst Democratic voters.

Today is a big step in our march toward equality. Gay and lesbian couples now have the right to marry, just like anyone else. #LoveWins

“Our nation was founded on a bedrock principle that we are all created equal,” Obama said in a speech in the White House Rose Garden on Friday. “The project of each generation is to bridge the meaning of those founding words with the realities of changing times.”

Following his speech in the Rose Garden, Obama flew to Charleston to deliver the eulogy for Clementa Pinckney, the slain Emanuel AME pastor and South Carolina state senator. The oratory which helped Obama win the White House in the first place was on full display.

“Reverend Pinckney embodied a politics that was neither mean nor small. He conducted himself quietly and kindly and diligently. He encouraged progress not by pushing his ideas alone but by seeking out your ideas, partnering with you to make things happen. He was full of empathy and fellow feeling, able to walk in somebody else’s shoes and see through their eyes.”

He gave the country a history lesson about black churches.

“Over the course of centuries, black churches served as hush harbors, where slaves could worship in safety, praise houses, where their free descendants could gather and shout ‘Hallelujah…’”

He gave the country a theology lesson about grace.

“According to the Christian tradition, grace is not earned. Grace is not merited. It’s not something we deserve. Rather, grace is the free and benevolent favor of God.”

He spoke to the Confederate flag.

“It’s true a flag did not cause these murders. But as people from all walks of life, Republicans and Democrats, now acknowledge, including Governor Haley, whose recent eloquence on the subject is worthy of praise as we all have to acknowledge, the flag has always represented more than just ancestral pride. For many, black and white, that flag was a reminder of systemic oppression and racial subjugation.“

“Maybe we now realize the way a racial bias can infect us even when we don’t realize it so that we’re guarding against not just racial slurs but we’re also guarding against the subtle impulse to call Johnny back for a job interview but not Jamal.”

“For too long, we’ve been blind to the unique mayhem that gun violence inflicts upon this nation. Sporadically, our eyes are open when eight of our brothers and sisters are cut down in a church basement, 12 in a movie theater, 26 in an elementary school.

“But I hope we also see the 30 precious lives cut short by gun violence in this country every single day, the countless more whose lives are forever changed, the survivors crippled, the children traumatized and fearful every day as they walk to school, the husband who will never feel his wife’s warm touch, the entire communities whose grief overflows every time they have to watch what happened to them happening to some other place.

“The vast majority of Americans, the majority of gun owners want to do something about this. We see that now.”

He even ended the eulogy by singing “Amazing Grace.”

Although more progress needs to happen on most of these fronts, this has been a phenomenal week for the Obama administration and the United States in general. However, there was no disillusionment on the part of the president that the hard work was over.

“To settle for symbolic gestures without following up with the hard work of more lasting change, that’s how we lose our way again,” Obama said during Pinckney’s eulogy. “It would be a refutation of the forgiveness expressed by those families if we merely slipped into old habits whereby those who disagree with us are not merely wrong, but bad; where we shout instead of listen; where we barricade ourselves behind preconceived notions or well-practiced cynicism.”