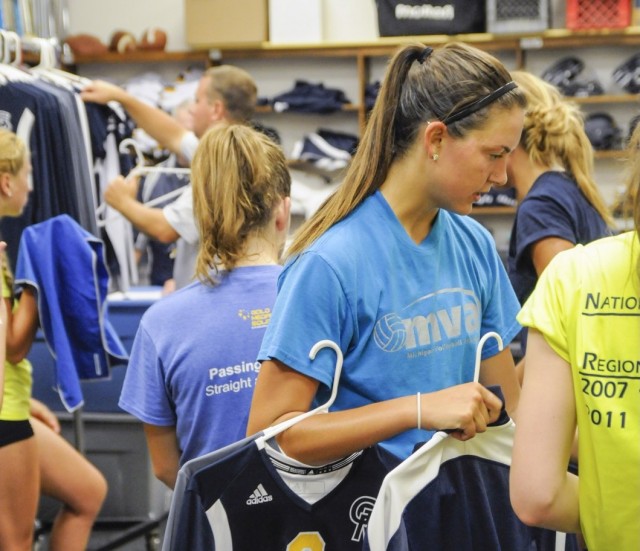 When the Grand Rapids Community College volleyball team takes the court this year, fans will notice many new players. One of these players is 19-year-old Kalamazoo area native Amanda Metz, who transferred from Charleston Southern University in  South Carolina.

Metz attended Charleston Southern as a walk-on, but transferred out after the fall semester due to financial reasons.

“It has been really chaotic for me coming from Charleston, but now I feel that I am settled and just really ready to work hard,” Metz said. “This is a really well-run program that is run like a Division I program”

As a student at Otsego High school, Metz invested all her time in sports. She was a four-year starter on the school’s basketball and volleyball teams. She also played softball, tennis and ran track.

“I could not have made it without my biggest supporter, my mom, Danene,” Metz said. “She coached me in volleyball up until high school and she has traveled hours and hours to watch me play.”

Besides sports, she enjoys shopping and going to the beach.

“The reason I went to Charleston was for the warmer weather,” Metz said.

Wanting to major in elementary education, Metz  spent the past summer working at AppleTree Learning Center and babysitting. This past spring she coached 14-year-olds at Michigan Volleyball Academy.

“I really love teaching and coaching so that is what I aspire to do,” said Metz. “First there is the expectation of winning the national championship with this year’s GRCC volleyball team.”