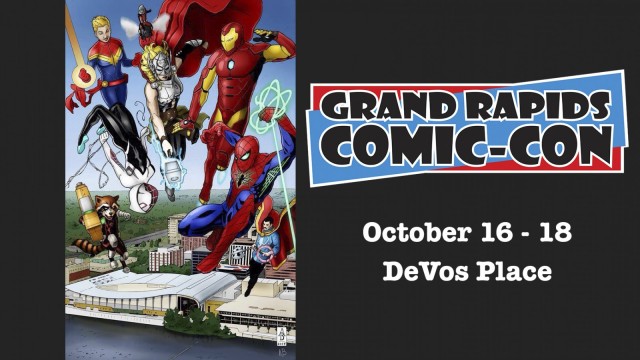 Attending the Grand Rapids Comic Con for the first time can be daunting. The crowds are large, the hallways are huge, and for people who haven’t been to a convention before, there’s a lot to learn. The following is a preparation and expectation guide for first timers to help make their first Comic Con experience a good one.

Carry a fully charged phone. It can take hours to find someone in the crowd, and in the event of an emergency, quick communication is vital.

Print at least one copy of the panel schedule before arrival. Either on the back of the schedule, or on a separate piece of paper, write down panels of interest with panel names, times, buildings and room numbers. Do not rely on phones – the time it takes to deal with a device failure may cost an attendee panel entrance.

Carry a bag prepared with water bottles, a phone, a notebook, a pen, glue, tape, sewing materials and (optional) a camera. If a camera is included, take two to three memory cards and battery backups. If any costume component requires batteries, carry backups. If any other portable item is required for costume repair, bring it.

When complete, the schedule will be shown on this page.

Other event and scheduling information can be found under the “Programming” and “Guest” headers on the event website.

Get tickets ASAP. Cosplayers and attendees for panels scheduled before 1 p.m are encouraged to mail order their tickets to save time.

If tickets are to be picked up or purchased at the con, come as early as possible. Avoid picking up tickets on Saturday, the wait can easily be three hours or more.

Carefully read ticket descriptions before purchasing. Unless an attendee is an extreme fan or a reporter, paying for a limited VIP badge is not recommended.

Friday is the best day for shopping. There’s less hallway traffic than Saturday and more open stores than Sunday. Some stores cannot restock between days, so Friday typically features the largest range of buying options.

Saturday is the best day for photographing and wearing costumes. Convention attendance will be at its highest. Most photoshoots, events and panels happen on Saturday. Reporters, bloggers and professional photographers swear by it for the bulk of their shots and interviews.

Sunday is the best day to see rare costumes. Unless a rare character costume is abnormally complex or eye-catching, most cosplayers save their rare wear for Sunday. This is because Sunday has the fewest people in attendance, and most don’t want to miss photo opportunities for popular costumes.

Before the con, research any merchandise intended to be purchased. Specifically, for each item type, look for seals of legitimacy, market requirements, and approved vendors. Some convention vendor stands may sell counterfeit or off brand goods.

Come to panels two hours early. The lines will be long and people at the end may be turned away. Carrying a few bottles of water and a good book is highly recommended.

Always bring photo ID to 18+ panels. Guidelines are strict about 18+ panel admission. If someone doesn’t have proof of age by the time they reach the panel entrance, they will be turned away regardless of how long they waited in line.

A majority of cosplayers come to conventions intending to be photographed and will agree if asked. However, never photograph a cosplayer without asking them. Never ask a cosplayer for a photograph when they’re eating or busy.

Most cosplayers respond to the name of the character they’re cosplaying. When uncertain about the name of a character, it’s okay to admit it when asking. Never poke or grab at a cosplayer to get their attention, it may damage their costume.

Most cosplay photos will be posted online. It’s a good idea to track convention tags to ensure costumes are credited properly. If a photograph isn’t wanted online, clearly say that to the photographer(s) before they take the photo. However, because of the high number of photographers present, it’s advisable for an attendee to not come to the con in cosplay if online photo posts are a concern.

Click here for a listing of fandom specific events

Finally, relax and have fun. Even though attending Comic Con for the first time can be intimidating, proper preparation will allow focus to be placed back where it should be – on the enjoyment of the event.