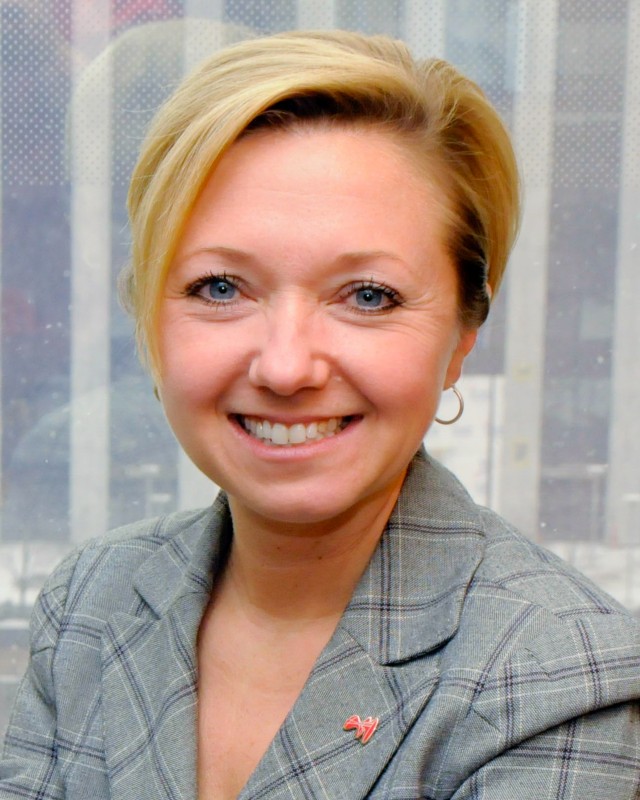 Education: Bachelor’s in Psychology and Criminal Justice at University of Southern Alabama and Master of Social Work at Michigan State University

Growing up in frigid Sault Ste Marie, Michigan, Mayor Rosalynn Bliss was certain of one thing considering a college for her undergraduate studies. The university location was going to be in a warmer climate. Bliss applied to nearly a dozen schools in southern states and was accepted to the University of Southern Alabama – notably the first to offer her a scholarship.

The decision to leave the snow belt may seem spontaneous, but incontrovertibly not. As Grand Rapids’ first female elected mayor, Bliss’ route to the office has been clear-sighted and thoughtful. Her passion has always been to serve others.

Upon completing her undergraduate degree, Bliss moved to Grand Rapids, started working full-time for St. John’s Home while commuting to Michigan State for her master’s degree.

You’ve been in office as mayor just over one month. From your perspective, how is it going?

It feels good. I did my neighborhood meetups this week in each ward, spending time listening to what’s on people’s minds, their concerns and to answer some questions.

Can you expand on your retention plan, to keep talented graduates here in Grand Rapids?

We know when people graduate they are looking for places to go, to find jobs and a good life, not necessarily applying for a job then moving. Making our city desireable is so important, that we have a vibrant downtown with amenities and great neighborhoods. We invest a lot in being a place where people want to live, to start a new business, supporting entrepreneurs who bring jobs.

If someone is considering a career in politics, what would you recommend doing?

Get involved in the community, an area you are passionate in. I always say to people, find your heart, follow it and put your energy there. If you are interested in education, get involved, maybe run for the school board. If you are passionate about corrections, the court or community health, you may have a place on the county commission. Those who are interested in parks, public safety and neighborhood development should consider the city commission.  We have so many initiatives and ways to be involved here in Grand Rapids.  Again, what’s important is identifying your interest.

Should public service be a core requirement for graduating college students?

I don’t want to give a blanket statement but I think there is great value in being of service to others. We have a strong base of volunteers (in Grand Rapids), cleaning up the river, planting trees, mentoring kids, helping families and many other projects. I want people to want to give back to the community. For me, it feels good to help other people. I also recognize that schools have a lot of requirements so I am aware of the demands for students.

What would you say to students with regard to loans and debt?

I was very mindful of loans and debt as my family was not able to help me financially. Knowing the debt was going to be mine alone, I probably made different decisions. We need to do a better job educating students at the high school level, on the front end. Engaging families as well as students to talk about debt, what it would cost exactly if transferring to a fouryear school. Being direct about interest charged and the difference saved by paying the loan back in ten rather than 25 years. I chose to buy a cheaper car and a smaller apartment so I could pay more towards my student loans in addition to working and paying loans while still in school.

Is there a plan to expand affordable city housing for students?

Rockford Construction has a development project on the west side where we know there is a higher density of students with micro-units that are more affordable. GRCC is surrounded by historical housing with a number of homes that have already been converted to multi-units.  Nearer to Eastown a 20-unit development is in the process, the target market being college students.

What is the new biking safety program?

In the spring we will be kicking off a new program educating cyclists and drivers about rules and responsibilities of the road that will continue throughout the summer. Multiple media outlets such as social media, print and television will be utilized.

Is city hall moving forward with a plan to become more digital?

Yes. We have got to be a digital city hall where people can get the information they need without having to come to the building. Our website needs to be revamped, taking advantage of and developing apps, for all to get information at their fingertips. It’s in the works.

Do you support the legalization of marijuana for recreational use?

Here in our city when we passed the decriminalization of marijuana use. I supported that campaign. It was a barrier for people caught with a small amount of marijuana to find employment. The state will decide if recreational use becomes legal. It then becomes our job at the local level to figure out how to comply with state laws, more about issues of zoning.

What is Grand Rapids doing to support and avoid a situation like the Flint water crisis?

The city and a number of local businesses are supporting Flint with bottled water and filter drives. The tragedy in Flint has made us and other cities look at, to insure we are providing high quality water. My job is to inform and reassure the public we are doing our job correctly. We know lead-based paint poisoning is happening in a number of communities, including ours. We’re working with Healthy Homes continually to address the issue of lead abatement.

How do you feel about term limits?

There are several people in the community who want to change term limits. Because it was a charter amendment, it has to again be a charter amendment on the ballot that is voted on. I have always opposed term limits at every level of politics. Some (politicians) are thinking 6-8 years down the road and not always beyond that. I have been the director at St John’s Home for the last 10 years. Can you imagine if I had to leave my job because my term was up and the impact that would have on a nonprofit? It’s unfortunate, because term limits (in my opinion) don’t encourage long-term thinking.

Do you have a political hero?

I have many. Eleanor Roosevelt, Abraham Lincoln to start. Then of course, Jane Addams and Alice Paul – incredibly strong women who at the time did not have the right to vote but still influenced politics.

Have you thought about future public office after your term as mayor?

No, not at this time. Right now, I am singularly-focused on the job at hand, being the best mayor I can be.

Mayor Bliss is eligible at this time for two terms, or eight years as the mayor of Grand Rapids.