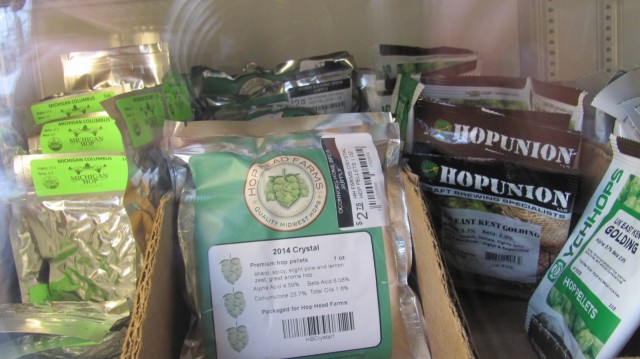 Michigan, specifically Grand Rapids, has gained nationwide attention for it’s micro brewery scene, with an undercover homebrewing culture rising. What some people may not know about is the rising popularity of the art of homebrewing in West Michigan.

The growth in craft brewing isn’t just confined to brew pubs. There are now several home brewing clubs and home brew supply stores operating in the area as well. Some area stores include Coldbreak Brewing Equipment in Cedar Springs, Gravel Bottom Craft Brewery and Supply in Ada, and Siciliano’s Market and O’Connor’s Home Brew Supply in Grand Rapids.  As more people are enjoying craft beer, more are also becoming interested in the hobby itself.

Steve Siciliano, owner of Siciliano’s Market at 2840 Lake Michigan Dr NW, opened the home brew supply and specialty beer store in 1993 and said he has seen a steady growth over the years.

“When I bought this in 1993 it was really before there was any craft beer on the market,” Siciliano said. “After struggling for about four years, I was looking for things to do to bring people into the store, (and) somebody suggested I do homebrew supplies … We were one of the first stores in town to start really focusing on craft beer and the home brew supplies.”

“The growth of home brewing in this area, probably across the country obviously coincided with the craft beer revolution. One fed off the other. I know soo many professional brewers that started out as homebrewers.”

“I think in West Michigan we had such a solid home brewing community, that’s one of the reasons we have such a solid craft beer community around here”.

O’Connor’s Homebrew Supply opened five years ago this March. Ben O’Connor and his wife wanted to start a small business, and as he had experience in home brewing, he decided to “give it a shot.”

“Like any home brewer I wanted to start my own brewery”, O’Connor said.

He says he’s now glad he decided to open a home brew supply store instead because of the stress and capital required for a brewery, adding that the home brewing industry is the grassroots of the brewing industry.

Both Ben O’Connor and Steve Siciliano are happy to hear the news about GRCC’s new brewing program coming this summer.

“It’s awesome,” O’Connor said. “It’s really cool, anytime you can educate people, especially on a community college level. “Having some kind of course that teaches you how to brew beer, teaches you about the industry on that level is awesome,” said Ben O’Connor, of O’Connor’s Home Brew Supply. It’s only good for the whole brewing industry and great for us too, in a business sense.  More people are going to want to know how to brew so they are going to come to us.”