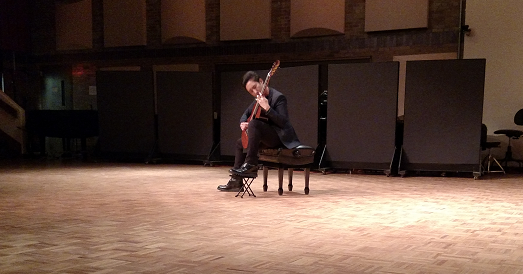 Room 200 of the Music Building was filled with students and local music enthusiasts of all ages, for what would be the final International Guitar Series concert to take place in the building before it closes this summer for renovations.

A little more than halfway through a tour that includes more than 50 performances, including a performance at Carnegie Hall in New York City, Jearakul displayed the poise and grace that would be expected from the winner of such a prestigious competition. Dressed in a finely pressed black suit and carrying a humble looking classical guitar, and without any of the electronics often expected for a guitar performance, Jearakul entered the room and took up his position on the lone black leather bench positioned in the center of the room.

Beginning with a soft, relaxing melody, Jearakul immediately had the audience’s undivided attention. His selection of pieces, classical in nature, are laced with undertones of influence from a variety of genres. Transitioning seamlessly from light and bouncy melodies, to heavy and frantic segments, Jearakul kept the audience entranced throughout the entire performance.

Altogether it was a very successful night, and a great farewell to a room that has seen its share of performances throughout the years.